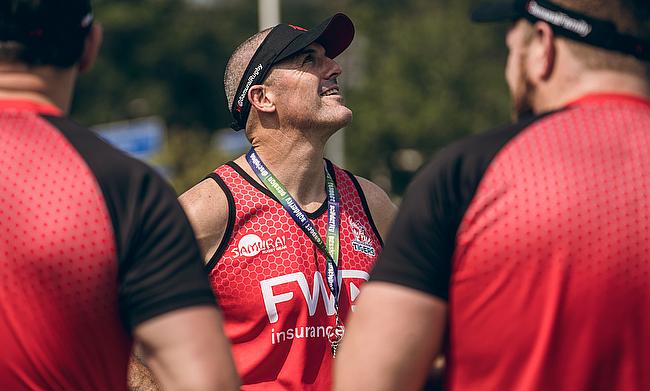 Craig Hammond is enjoying his time over in Hong Kong
©HKRU

Trio of Scots out to help Tiger Rugby roar in the USA
Ross to use ‘New Zealand experience’ at NTU and Nottingham
Olympic Qualifiers: Colomiers: After the final whistle
High praise for Rosslyn Park by Sneddon as he continues his work with Hong Kong

"My first six months there [in Nottingham] I worked, randomly, at Imperial Tobacco, the cigarette company,” Craig Hammond started.

"That’s how I ended up over there. My father knew someone that was at Imperial Tobacco and they had involvement with the club, so they got me to Nottingham. Otherwise, I wouldn’t have even got there.”

Now working as a coach with the Hong Kong national men’s team, as well as with Rapid Rugby side the South China Tigers and club side Hong Kong Scottish, Hammond reflects kindly on his time with Championship outfit Nottingham, where he spent 11 years and captained the club a record 227 times.

Only initially going over to the East Midlands for six months, the New Zealander stayed on, running the clubs community programme for six years before going fully professional as a player.

Coaching at Ilkeston Rugby Club and Nottingham University when not on the pitch himself, Hammond still talks very highly of the city seven years after his departure and how they helped to start his coaching career.

“I love Nottingham,” Hammond said. “I love the city, the club, what we’re about and where we’ve come from. Whether I was coaching at schools, doing a bit at Ilkeston Rugby Club with Dave Jackson for a couple of years, I coached Nottingham Uni for four years as well, so I knew when I was quite young that avenue was for me (coaching).

“I really enjoy passing on the knowledge and as a young player you think you know quite a lot. Over the years I carried on coaching at night and being a full-time professional during the day, but I knew that’s what I wanted to do. I could have maybe stayed at Nottingham for a couple more years and eventually made my way there, but Neil Fowkes had just started with the forwards and he was doing a bloody good job, so I knew it was going to be a hard in for me there.”

Leaving the Championship club in 2012 to take up a player/coach role at Hong Kong Scottish, Hammond hung up his boots after becoming involved with the national side: “It was pretty hard to get pretty tasty with a few of the lads and then having to turn up on Monday and coach them as well. So, I stopped playing and have just been involved with the national team in various roles.”

Serving as both the defence coach and forwards coach for the national side, Hammond was involved with the Hong Kong team that got to the repechage tournament in Marseilles last year. Coming up against Kenya, Germany and Canada, Hong Kong fell short in the tournament, with Hammond admitting that although there were positives to take, it was still a difficult pill to swallow.

Less than 12 hours and counting - this is your match day 23 taking on Kenya for Game 2 of the RWC2019 Qualifiers Repechage - kick off at 8pm HKT. Catch it live on www.hkrugby.com #letsgohongkong #hkrugby #rwc2019

“Yeah, it still breaks me to be honest,” Hammond continued. “It’s pretty hard. The boys worked really hard and I was part of that three-year build-up to that. We progressed and got into the full-time scheme and that changed the whole aspect of Hong Kong Rugby. There is some great support from around Hong Kong, to help bring the guys into that full-time environment and it’s pretty unique.

“We slowly built that programme with the likes of Leigh Jones, Dai Rees, those guys are pretty big names in Wales, they’ve come over and started the programme. Andrew Hall, who’s the head coach of the Hong Kong team now, he runs the Elite Rugby Programme and those are the guys that have been involved for six, seven years and pushed it from strength to strength.

“We honestly thought we had a good crack at going to the World Cup. I think the rest of the world thought we were miles away, but we had a genuine belief that we had tracked really well, beating the Cook Islands. We were perhaps undercooked going into that tournament. We got a bit of a shock against Germany, which was disappointing, a good win against Kenya and then we had a mountain to climb against Canada.”

After their disappointment in the south of France, Hammond says that the coaching staff have since addressed where they felt they were lacking in the tournament and how they will try to improve for the Hong Kong’s next tilt at World Cup qualification.

Also the Head Coach of Hong Kong’s Rapid Rugby team, the South China Tigers, Hammond has enjoyed immersing himself in the nuances of this brand new format of rugby union. With matches lasting 70 minutes there are also time constraints on the times to scrum as well as set a lineout. Not being allowed to gain ground from a freekick, even inside your own 22 and a nine point try for when a team scores a try after scoring from within their own 22 are also new rules which are in place.

Hong Kong’s involvement in the competition came about after a trial game against the Western Force where Hammond took the majority of the Hong Kong national team to western Australia, along with some players who played domestic club rugby in the special administrative region.

No rest for the best!

“There was a bit of chat that they were trying to start this Rapid Rugby, so it was a bit of excitement and they kept saying it was going to happen and then it got confirmed about a month or so before it actually kicked off.

“I was strapped in pretty quick and I loved it. With the rule changes there was more attacking flair and the ball being in play more, we haven’t experienced anything like that. Even in our games against Korea or at the repechage, we never got near the ball in play time that we have against the Western Force or the Asia Pacific Dragons.”

The South China Tigers squad was largely built up of Hong Kong qualified players, but the Tigers were able to attract a couple of star names. Olympic gold medallist Sami Viriviri and Premiership Rugby’s top try scorer Tom Varndell both turned out for the team as they performed well on their first outing in the competition.

Continuing with the Hong Kong Rugby Union for the foreseeable future, Hammond hasn’t ruled out a return to England. Still holding a place in his heart for the country, in particular Nottingham, a name that he pronounces as if he were a local, the former backrow believes that the country is a great place to coach rugby.

“I think the UK is a pretty fantastic place to be coaching. Whether that is National One, Championship or Premiership, I think there is a lot of opportunity out there. You’ve only got to look at the university side of it, that Super Rugby that they’ve got going. Where it leads in the next few years, we’ll have to see.”