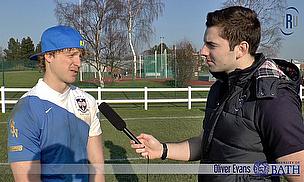 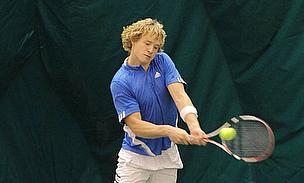 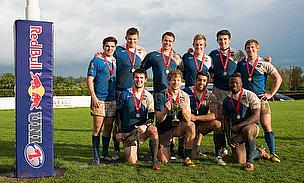 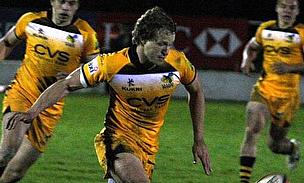 Dowding Going for Gold in Brazil
Treharne Confident ahead of Wales Debut
Tom Dunn - From 1 to 2
Callum Sheedy - From Millfield to the Mem.
Tom Whiteley - Next Stop Saracens

For Oliver Evans a career in tennis was always the aim, although, after attaining a world ranking, it was a wrist injury that kept the British hopeful from continuing his journey; however, since then Oliver has traded in the yellow ball for an egg-shaped one and embarked on a career in rugby.

After being told that he would never be able to play tennis to the same level again, just before going to Bath University, Oliver decided to chance his arm at his other sporting love – rugby.

Since then it has been a real dream ride for the young centre as he has moved from a fresher at rugby trials in his first year to a graduate who has just sealed a senior academy contract with London Wasps.

With any sport there is always transferable skills that can be applied to another; however, as many would attest to, tennis and rugby are not the most natural of crossovers. Physicality is obviously the standout difference, but Oliver, who originally started his days on the wing, has managed to make up for lost time, bridge the gap and excel within the professional game’s mid-field.

By the end of Oliver’s first year he has worked his way into the university first XV squad and since then, in his final two years, has been a key member of the starting first team, with leading the sevens side to tournament victory this summer being a particular highlight.

Talking Rugby Union’s Austin Halewood spoke to Oliver ahead of the start of his pre-season training with Wasps about his incredible story so far. Oliver joins the illustrious list of TRU selected ‘emerging talent’, which already boasts features on the likes of England winger Jack Nowell and Munster flanker Sean Dougall.

“Basically I left full-time school at 14 to go and train full time at a tennis academy in North Wales,” Oli recalled, “and from then on I was home schooled with other tennis players whilst playing and training full-time, five days a week for four to five hours a day.

“Up until I was about 20 years old I was trying to become a professional tennis player, which was always the main dream of mine as a fan of all sports from a very sporting family.

“Rugby was always my family’s main sport with my dad being big into it and my brother playing a lot when he was younger. I would always play touch or whatever with my friends but tennis was always my job.

“When I was about 18/19 I got a world ranking for singles and doubles with things looking promising on that front; however, unfortunately, I had this injury in my wrist which basically snapped it partially.

“After spending most of my life aiming to be a tennis player one surgeon just one day crushed all of that by saying that I would never be able to play tennis again at that level. It was a pretty devastating time.”

However, things soon turned around for Oliver as, by that point, he had already been accepted into Bath University and from there joined the rugby club after trialling in his first year.

“After arriving there and having played mini rugby at sort of age 7-14 I thought it would be fun to give it a go and try my hand at rugby once again.

“I went down to the pre-season in my freshers year and did okay, with some transferable skills from tennis such as being able to move well and good hand-eye coordination which helped me make the university’s elite training squad in my first year.

“In that first year of uni I pretty much played in all of the teams, whether it the fours, threes, twos and then a few games off the bench for the ones in my first year. So it was a pretty unexpected turnaround I have to say.”

Having focused on a tennis career for so long, though, we wanted to found out how Oliver had accustomed to now following a future in rugby and whether he was enjoying the sporting switch.

“When I was playing tennis there was a real sense of loneliness – at times it can be a very lonely sport. You can often be travelling to foreign countries on your own and sometimes without funding you have to pay for a coach to come with you – it can be a very expensive sport.

“There’s no teammates to play with or to pick you up when you’re feeling down or not playing well, so from that perspective I prefer rugby. I love that it’s a team sport and you’ve got your mates around you.

“Although they are very different sports I do think I now enjoy playing rugby more than I used to enjoy tennis, mainly from that team aspect.”

As mentioned previously, physicality is, of course, the biggest change that would have greeted Oliver when beginning to play rugby. Joining and succeeding in the game at a much older age than normal at the high level that university rugby brings is an incredible feat.

Having to pit himself against much larger opposition who have been playing the game every week for years on end, in games and even just training was admittedly a difficult introduction for the now Wasps centre.

“So coming into rugby is nice in some ways as when you make a mistake you can try and vent all of that frustration by putting in a big hit or whatever, so in that respect I have really quite enjoyed the physical side of things.

“Obviously at first it was a bit of a shock to the system. I remember after playing my first match at university, which was a pre-season game against Richmond seconds, I woke up the next morning barely able to move, feeling like a bomb had hit me,” he laughed.

“I used to play when I was 13/14, as I mentioned, and back then I used to enjoy the contact which probably came from growing up with an older brother who used to tease me.”

Since the young centre’s time coming through the ranks at Bath University, Oliver has now been signed on a senior academy contract with Wasps and proved that older players coming later to the game can succeed.

“Yeah, I’m part of the senior academy there at the moment, so I’m full time with Wasps. We do S and C stuff with the senior team and then some of the academy’s top guys will train with the first team ahead of the A-League and possibly the LV Cup.

“It all came about through uni really,” Oliver admitted, “I did pretty well there captaining the side sometimes and playing well. Then a few people like Danny Grewcock and former England 7’s assistant coach Russell Earnshaw who helped me get in contact with Wasps.

“It was all down to a lot of hard work, really, and then of course a bit of luck.”

Due to Wasps final game of the season against Stade Francais taking place a few weeks into the off-season, the Wasps have only just begun their pre-season training at the start of July and Oliver is already enjoying his time there.

“Each week there is plenty of fitness testing at the moment, coupled with specialised skills for each position, a lot of gym and then full team training. It seems to work around two days in followed by one day off.

“It’s very full on at the moment but it’s the best way to prepare for the new season and I’m really enjoying it.”