Dowding Going for Gold in Brazil 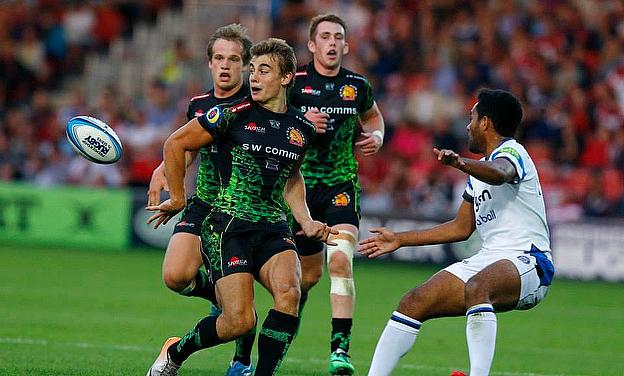 'Like Nothing I've Done Before' - Luke Treharne Interview
Sevens Rugby - the party, the costumes, the players
Sevens Rugby - For Everyone
Treharne Confident ahead of Wales Debut

One such player from Exeter who boarded the plane for Brazil on Monday night with Team GB was Tom Dowding. Talking Rugby Union’s Mike Stanton caught up with Exeter's rising star moments before he boarded the plane on his way to the World University Championships.

"It is the first time I’ve represented internationally so I was very proud to get selected," Tom said.

"Especially to be selected amongst a squad containing those who have played on the international circuit."

This may be his first experience of international recognition but the young flanker-come-winger already has a highly impressive rap sheet. Having started playing for Tunbridge Wells at junior level, Tom has made himself a regular in the EURFC 1XV as well for the Exeter Chiefs 7s side.

"I have played in the Premiership 7s the last two seasons," Tom continued. "It has been a really great experience, especially when you are playing against experienced Premiership players like Paul Hodgkin and Akapusi Qera."

Dowding was also selected to play for the Chiefs 7s this year in the season opener at Kingsholm. The west country outfit went for an exciting and young squad featuring five of Tom’s team-mates from University; however, the team were unable to make it through to the Grand Final despite putting in some impressive performances.

"It was very disappointing," said Tom of the Gloucester tournament. "The last game was effectively winner-goes-through versus London Irish.

"We took the lead but couldn’t hold on. We were frustrated as it was a game we felt we could, and perhaps should have won.

"I was fairly pleased with my own performance," he continued. "I managed to score a couple and was knackered at the end which is usually a good indicator."

Tom has spent this 7s seasons playing in the GB 7s circuit for the Injured Players Foundation side, which is where he got noticed for the international call-up.

"I am really happy to have been selected for the GB team," he said. "I got in through my involvement with the England IPF 7s team on the GB 7s circuit so I am really happy that the performances there earned me some recognition."

As for the tournament in Sao Jose dos Campos, Tom admits the squad are feeling confident.

"We have a very talented squad with lots of top level experience so I can see no reason why we can’t go out there and challenge for the gold."

With fellow Exeter University student and team mate Luke Treharne making the step up from GB Students 7s to representing Wales at this year’s Commonwealth Games Tom admits the pathway is there to higher honours, but is keeping his feet firmly on the ground and is staying focused on the job in hand.

"The chances are obviously there as lots of British 7s players come through the GB Students side," Tom said.

"But that is a long way off; first things first for me. I am just hoping to put in some good performances in Brazil."