Tom powers through the defence 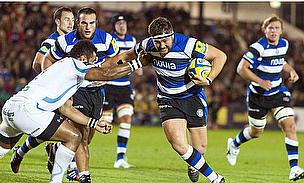 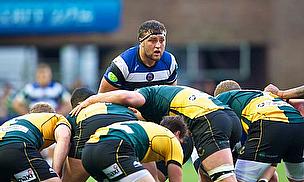 For former Bath University student Tom Dunn the last two years within the Bath Rugby Club ranks have been a real whirlwind, as not only has the young forward made the transition from university to professional rugby in record time, he has also changed his position.

Back in 2012 the then undergraduate was the unlikely call-up to the Bath first team as they were experiencing a major hooker crisis ahead of a fixture with Italian side Calvisano.

A young, inexperienced Tom made came off the bench to make his first team senior debut in their ten-try thrashing of the Italians. However, it wasn’t age but Tom’s position that made the feat so remarkable.

Just four weeks before his debut Tom had been playing as a loosehead prop, like he had for the entirety of his rugby career. Only affiliated with the club as an academy member until a month before the game, Tom was noticed by forwards Coach Neal Hatley and Academy Coach Danny Grewcock.

The pair saw the potential within Tom and his game and decided he would be able to progress quickest if me made a shift across the front row of the scrum and took his place at hooker.

England throwing Coach Simon Hardy was then drafted into the fold to take a look at Tom and assess whether he had the potential to be a successful lineout thrower – the cornerstone of any professional hooker’s game.

Having passed sufficiently with plenty of potential for the position Tom was thrown onto the hooker fast track and the rest of the young forward’s rugby career unfolded in front of him, as he went from a student to a professional.

The young front rower spoke to Talking Rugby Union’s Austin Halewood ahead of the coming season to talk about his ambitions for the future and his incredible career so far.

“I always had played as a prop mainly,” Tom began. “I played a few games in the A-League as a prop but struggled a bit with the physicality and then I tried a few at flanker too, but wasn’t as comfortable at the back of the scrum.

“So for myself and the coaching staff, I think hooker was seen as a bit of a medium. I was told to practice my throwing with Simon and just did a few weeks with him.

“Rob Webber and Ross Batty were out of action for a few weeks due to a suspension and an injury, so it opened a space where I was chucked in as a cover really for the Amlin Cup group stages and luckily I played well down there and managed to stay in the squad for eight games on the trot.

“From then on the studies kind of disappeared for a bit and I’ve been able to concentrate on my rugby.”

Although the former prop has only moved sideways one position, as any fan or player of the game will know, the roles and requirements of each position are completely different. However, Tom admits that he is loving the change of scene.

“Yeah I really prefer it,” he began, “I get a lot more opportunities to ball carry and show what I can do around the pitch a lot more.

“It leaves a lot more in my legs too, so I’m not as fatigued and tired all the time.”

With us now into July all professional clubs are well into the start of their pre-season training and Bath, of course, are no different from this mould. Beginning in June Tom and his West Country teammates are battling through a gruelling weekly fitness, skills and training programme ahead of the start of the new season.

“Pre-season is going pretty well so far,” the hooker explained. “We are doing a lot of gym work at the moment to start off pre-season and we haven’t actually done any real beasting as of yet.

“We’ve been focusing on skills, a lot of pattern play, organisation, our lines of running and then a lot of speed work and agility training as well.”

A typical pre-season week for Tom and the Bath boys begins with “double weights on the upper body on a Monday followed by a split skills session for forwards and backs. Then on a Tuesday we do a team session, then lower body weights and a speed session with our sprint coach.

The layout of just a typical week during pre-season for Tom and the rest of the Bath squad as they prepare for another tough season in the Aviva premiership and attempt to quash the heartbreak of last year’s premature exit.

After a fantastic run throughout the entire league campaign, spending most of the year well within the top four play-off places, Bath found themselves in a play-off decider with Harlequins in the last regular season fixture of the year – billed the Premiership quarter final.

After leading Harlequins for the entire season, tough, it was Chris Robshaw’s men who seized the upper hand on the day and took their spot in the play-offs with a hard-fought 19-16 win at the Stoop. However, Tom insists that Bath have recovered from the heartbreak of last season:

“We still, and always have, seen ourselves as a top four side and it was only one point that kept us from achieving that last year. So it was obviously really hard to take but quite motivating for us at the same time.

“We did really well last year but not converting in that final stage is now motivation for this season; losing in the final of the Amlin as well was bitterly disappointing but obviously we have just got to push on.”

Although the result didn’t go Bath’s way against Northampton in the Amlin Challenge Cup Final, the showpiece fixture was an enormous occasion for Tom as he donned the number two jersey and started Bath’s most important game of the season – a true testament to his promise as a player and the belief Bath have in him.

“It was a great experience for me,” Tom recalled, “I just tried to keep my head focused on the game in the build up to it and think that it was just another 80 minutes against 15 other players.

“But I was just really proud to be playing – it was an awesome experience.”

Tom’s rise through the ranks of Bath rugby from a university undergraduate, part-time in the academy to a full-time member of the first team squad starting in the Amlin Cup final has been an incredible one.

With the new season now fast approaching and pre-season well underway Tom admitted that for this year he is “really to just try and get as much game time in the first team as I can, really.

“Given the opportunities I just want to carry on and show what I am about, you know. I’d like to play a few more games this year and hopefully double figures. Then there is always the LV Cup, it would be great to get some time in the LV under my belt. Then there is of course the A-League and we have an A-League title to defend.”