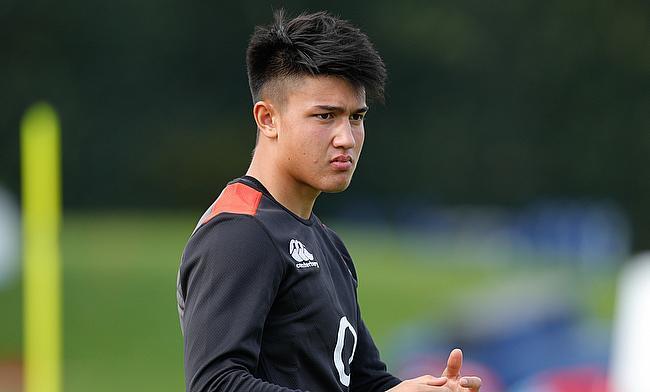 I’ve written a few columns now, and it felt like it was the right time to come up with a name other than ‘Joe Harvey Column’.

Unfortunately the new name came to me rather quickly after I saw that Stafford RUFC had played Walsall RFC at Delves Road.

The memory of heading down the motorway and getting my first start for the Colts is a fond one, but a reminder that I could only get game time in a midweek tournament bolted onto the end of the season. I think the club even has one of my bibs displayed somewhere in the new clubhouse.

Anyway, here is a look at some things that I found interesting over the weekend. Enjoy.

There was so much to enjoy on Saturday afternoon as England beat Tonga at Twickenham. Amongst other things, the game signified the first time that England’s home would be close to capacity since the 2020 Six Nations.

It was a true delight to see the thousands milling around the concourses of the stadium, our slow return to normality clear. It was announced that 81,022 had made their way to West London and there was no louder cheer than for a player who calls that part of the capital home.

The minutes before Marcus Smith took to the field were some of the loudest that we experienced in the stands. When the 22-year-old ran back to the subs bench, repeatedly crashed into a tackle pad and did some passing drills, the anticipation was palpable.

He sets up @MarcuSmith10 who took England beyond 50!

It was then that there was a real excitement. For much of the game, fans were trying to start Mexican waves and waving the torch lights on their phones, but when the future of English rugby took to the field, all that stopped and an intense focus on the pitch began, even if the player himself wasn’t aware of the fanfare that surrounded his introduction.

“No, I wasn’t aware of it,” Smith said. “Ultimately rugby is a team game, and my role this week was to be a finisher.

“There were eight of us who came on and we did our best to make an impact, energy-wise and physicality-wise.

“I thought we did really well, but again, credit has to go to the first-half team who started the game and set the tone.

“We wanted a fast start, and they were brilliant.”

From memory, there doesn’t seem to have been such an expectation of a rugby player when they step onto the field than with Smith. His lore has been building for over four years, and for all the will in the world he looks likely to be the face of this country's men's team for years to come.

It isn’t hard to see why, Smith playing the game with all the freedom in the world, unlocking defences regularly and translating that club form that took Harlequins to a second Premiership title in early summer.

Eddie Jones has insighted plenty of debate, saying that Smith needs to remain grounded, in contrast to 18-year-old tennis star Emma Raducanu, whose activities post-US Open win the Australian deems to have been a ‘distraction’ to her and affected her performances on the court.

In some ways, those comments undermine this section in its entirety, but I will do my best to outline exactly what is meant by the section.

???"There’s a reason why the young girl who won the US Open hasn’t done so well afterwards..."

What do you think of Eddie Jones' comments about GB tennis star Emma Raducanu following England's win on Saturday?

Owen Slot, Chief Sports Writer at The Times, penned a wonderful article at the end of October titled:

In the article, Slot speaks to plenty to have worked under Jones, recounting how tough the Australian can be on players and coaches who work for him. Looking at the coaches who have worked for England since 2016, as well as why certain players – such as Danny Care and Mike Brown - that fell out of favour with him over the years.

It all starts with the departure of John Mitchell from the setup, who now works for Wasps as their defence coach, and why he decided to leave the national team. It all came down to Mitchell using a day off to go and watch his son, Daryl, play for New Zealand at Edgbaston, the standoff between the two the catalyst to Mitchell's departure.

Described as using verbal abuse, being rude, belittling and more, Jones was quizzed by Craig Doyle on BT Sport about the article and his management style.

“These things happen,” Jones told BT Sport. “Everyone has an opinion on how you operate I can’t say it’s right or wrong, I try to be a reasonable person.

“I’ve coached for a fair period of time and there have probably been times when I haven’t been as nice as I’d like to be. But I endeavour to be fair all the time and I’s excited to see where this team is going to go.”

Somewhat rattled when having these questions put to him, in the weeks that have followed, the 61-year-old has made several references to the article in press conferences. The most recent was on Saturday afternoon when talking about the Covid-19 disrupted build-up to the 69-3 win over Tonga at the weekend.

“The coaching staff gave them (Courtney Lawes and George Furbank) on how we’re going to move forward. I felt the coaches did a great job of doing that. If you look at the coaching staff, three of them are new, so they haven’t got sick of my yelling and screaming yet.”

Following the publication of said Owen Slot article, the RFU stood by their man and there have been accounts from some, like Paul Gustard, who had nothing but admiration for their former employer.

The references to the article to the media only lead you to believe that the piece is living rent free in Jones’ mind as his preparations for the 2023 Rugby World Cup continue.

Not fit for purpose

I’ll keep this one rather brief, as I am sure someone else will write something far more in-depth. When I left Twickenham, it was three hours after the final whistle and the queues were still traipsing down the B361.

You travel beneath the station, tightly packed into this concrete structure, with barely any space to move and no room for social distancing. Expansion of the station was scheduled to be completed in 2015 ahead of the Rugby World Cup. Over six years ago.

Amongst other things, I saw people hop over fences, people express their discontent to staff and employees who simply didn’t seem to care, stating that they were ‘just doing as told’.

This is before we even discuss Covid-19 and people’s comfort at being in large crowds again. This is something that has to be changed in the near future, because it is beyond a joke and will deter people from attending events at the Stadium.

It's simply not fit for purpose.

On Sunday afternoon, the Red Roses become the first team to score 50 points against the Black Ferns and that game was far more exciting and exhilarating than the game the men played out the day before.

The 56-15 win at Franklin’s Gardens was nothing short of magnificent. Amy Cokayne scored a hat-trick, Ellie Kildunne got her obligatory score, whilst Leanne Infante, Lark Davies and Abby Dow also got over the whitewash.

Now 16 games unbeaten, England’s preparations for the World Cup couldn’t be going any better. For so long the Black Ferns have been the pinnacle of the women’s game, comprehensively beating England in the World Cup Final back in 2017 and these back-to-back wins for Simon Middleton’s team may well signify a changing of the guard.

Full-time contracts for players in England are still relatively new after being first introduced in 2017, following in the footsteps of France, New Zealand and Australia in having their players focus on the game full-time.

Those contracts were controversially pulled after the World Cup in Ireland but reintroduced again at the start of 2019. Continued investment in the women’s game has not only allowed players to improve but has raised the profile of the game in England.

On Sunday, 9,000 people made their way to Northampton in order to cheer their Red Roses on. Not a large crowd by any means, but it was a passionate one, an engaged one, that didn’t start Mexican waves or shine their phone torches in the air. They were passionate.

Ahead of games against Canada at the Stoop and the USA at Sixways, expect much of the same.

Viewing figures from the BBC for England’s win at Sandy Park peaked at 700,000 and had 97,000 requests online, proving beyond doubt that there is not only an appetite for the game on free-to-air television, but for the women’s game as a whole.

You can only dream about where the Red Roses can go, and with wins like these, support like that and viewing figures that make your eyes water, there is no reason to believe the team won’t be crowned as champions of the world in New Zealand.