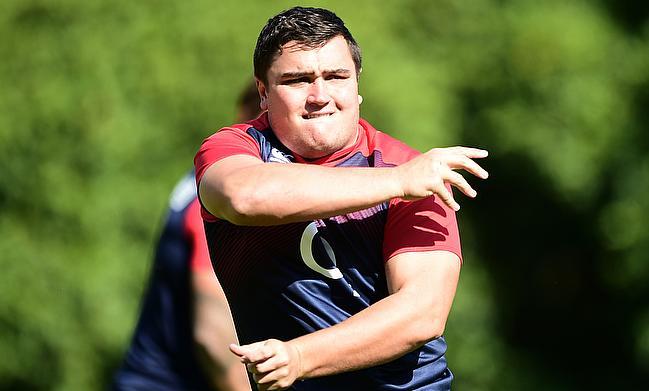 It wasn’t long ago at all that Jamie George received the news that he was not a part of Eddie Jones’ plans for the Autumn Nations Series.

Selected ahead of him was Luke Cowan-Dickie, Jamie Blamire and Nic Dolly, but when injury pushed Cowan-Dickie out of contention, the Saracens hooker received the call to come back into camp.

Losing his starting spot to Exeter’s Cowan-Dickie during the 2021 Six Nations, George still found himself on the plane to South Africa for the British and Irish Lions tour of South Africa during the summer.

Playing just three games on the tour, George was not a part of any Test squads. In some ways it was not a surprise that the 59-cap front-row was initially not a part of the squad - experience aside - but when misfortune struck for another, a revitalised and refocussed George arrived back in England camp.

“I actually missed his call, which was awkward,” George said when asked how he learnt the news of his initial omission. “The writing was on the wall at this point. It was tough. I found it really challenging.

“He said to me that I had not been up to speed for up to a year, which gave me an opportunity to go back and reflect on that. It is never nice not being selected and it was a really tough time.

“I had a lot going on in my mind, but I was really thankful to be going back into a club at Sarries where there is such a positive environment. I had some really good conversations there with Mark McCall and Joe Shaw and just sort of got their perspective on things.

“They gave me some clear direction on what I needed to do to get back to my best and I am really thankful for that and looking to try and work towards that going forward.”

Given individual feedback by Jones following his omission by Jones, the 31-year-old is honest in saying he found the last campaign difficult.

“It’s never nice not being selected, but Eddie gave me his reasons,” George said. “I tried to take those on board, but at the same time try and be true to myself. It was an opportunity for me to get back, enjoy my rugby again.

“It had been a tough year for me with everything going on, going down to the Championship, South Africa not going the way I wanted it to go.

If you missed England's 11-try victory over Tonga earlier, @joeharvey34 watched on and has provided the linked match report.

“So, getting back to Sarries, after the setback of not being selected in the squad, it just allowed me to get my head down and get back to work. I’m genuinely really enjoying my rugby again.

“I think we can see that from the way that I’m playing and trying to take that from Sarries into this England team.”

Of course, when Jones left George out of his training squad at the end of September, the desired effect was that the likes of George, the Vunipola’s and George Ford would kick on to regain a place in the squad.

Should they not do that, then a recall was unlikely to happen, but through consistently good performances would be back knocking on the door.

??"What if another positive comes back? Are we going to get a game in?"

After adding two tries to his collection, Jonny May spoke about the uncertainty of today's game??https://t.co/zdlGxeSPwQ pic.twitter.com/5Bmxd8FRPe

“Maybe I didn’t do that last year to the best of my ability, but at the same time I haven’t changed anything. All I’ve done is go back to realising what I’m good at and trying to put that forward onto the field.

“That’s what I’ve been trying to do, and I’ll continue to try and do that.”

Playing Tonga, unfortunately, was no real difficulty for England. Next weekend, that reality will be much different, with Australia making their way to West London following their 15-13 loss against Scotland at Murrayfield.

There have been clear improvements for the Wallabies in recent months, finishing second in the Rugby Championship, picking up wins over Argentina and world champions South Africa.

The only team that they could not better was the All Blacks, who convincingly beat them to keep their hands firmly on the Bledisloe Cup.

Eddie Jones also discussed England’s 69-3 win over Tonga which you can read by clicking here.