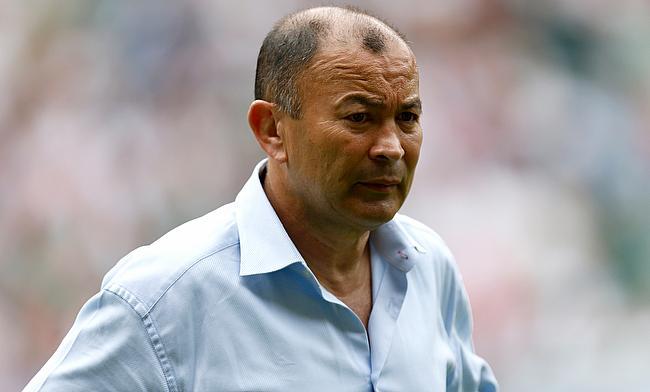 Jones will coach England against his native Australia next weekend
©PA

When Eddie Jones speaks to the media, the news that Owen Farrell would be released back to his squad was still unknown.

As far as he knew, Farrell would be confined to the four corners of his hotel room at Pennyhill Park for a while longer. No doubt a much nicer place to spend a period of self-isolation than most, on Sunday it was confirmed that England’s captain was free to re-join the squad.

Determined as a false-positive on Saturday morning - NHS Track and Trace accepting that finding - with further PCR tests that were conducted coming back as negative. With all that said, it didn’t undo the drama leading up to the dominant win over Tonga at Twickenham.

Part of the problem created by Farrell’s inability to play at the weekend was the unknown about who would captain England and who would play at fly-half. Throughout the rugby world, it seemed to all the world that Marcus Smith would reclaim the 10-shirt.

Starting two games at fly-half for England at Twickenham in the summer, the 22-year-old played the game as he had done the season prior and has continued in the same manner so far this season.

But having had a leg injury that prevented him from training, George Furbank was deemed as the man to start against Tonga. Doing a more than fine job before being replaced by Smith in the second-half and it was the 25-year-old’s Northampton Saints teammate that was entrusted with the armband.

Along with Ellis Genge and Tom Curry, Courtney Lawes was named as a vice-captain of England for the Autumn Nations Series.

Leading by example, the 32-year-old providing one of the highlights of the 69-3 win when he hunted down Telusa Veainu and stopped what seemed to be a certain try for the Pacific Islanders.

“They just get on with it,” Jones said when asked about how the two players stepped up. “They’re the sort of players you need. We’ve got no idea how long this Covid situation is going to last for and we’re going to get more situations like this, so the ability of the players to keep calm is important.

THAT IS OUTRAGEOUS, COURTNEY LAWES ??

“The coaching staff give them clear direction on how we’re going to move forward. I felt the coaches did a great job of doing that. If you look at the coaching staff, three of them are new, so they haven’t got sick of my yelling and screaming yet.”

It would be fair to say that when Marcus Smith was introduced to the game, he received the loudest cheer of the day. He calls that corner of West London his home, playing his club rugby just across the road from Twickenham, but his reception was something else.

Directly involved in several tries, it is apparent that Smith’s star is already shining brightly. In some ways, it feels as though every time the Harlequin touches the ball there is a belief that something brilliant is on the way.

Having such expectation on young shoulders, it cannot be an easy thing. Over the years, we have seen sportspeople like Adriano, Tim Tebow and Freddy Adu have too much expected of them, attract the wrong people to them and fail to live up to that initial hope, despite having a clear talent.

When it comes to keeping Smith grounded, it comes down to family, friends, teammates and coaches to keep Smith grounded, with Eddie Jones drawing comparisons between his fly-half and 18-year-old tennis starlet, Emma Raducanu.

“The big thing for young players is distractions,” he said. “The distractions could be exposure they get in the media, the praise they get, the criticism they get. There can be groups of agents who see this guy as the next big thing.

“There’s a reason why the young girl who won the US Open hasn’t done so well afterwards. What have you seen her on? The front page of Vogue and Harper Bazaar or whatever it is, wearing Christian Dior clothes. All that is a distraction around her.

On Sunday afternoon, England will have no doubt watched on as Scotland beat Australia 15-13 at Murrayfield.

Tries from Hamish Watson and Ewan Ashman, as well as the boot of Finn Russell, put Dave Rennie’s team to the sword, Australia failing to stop an impassioned home team.

Jones’ early days as England’s head coach is remembered for the whitewash of Australia in 2016 and the 61-year-old will be going toe to toe in his former employers once more next Saturday evening.

Keeping up to date with the goings on in his home country and is taking nothing for granted ahead of the game.

“They haven’t won five tests in a row in a long time, which is a good indication of how they’re progressing and how the team’s progressing under Dave Rennie. The breakdown against Australia is going to be brutal.

“Rennie’s teams are always renowned for being exceptional at the breakdown, so we are lucky we have got the best referee in the world next Saturday in Jaco Peyper, who is particularly very good in that breakdown area, so we are going to get a great contest.”

Learn what Jamie George had to say after his try-scoring return to England’s starting line-up by clicking here.