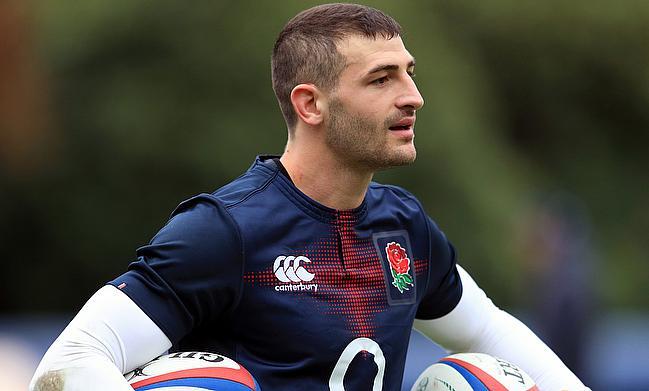 One of the players rested by Eddie Jones during the summer, Jonny May was back to his best at Twickenham, scoring two tries in England’s 69-3 win.

His first score was regulation, racing in at the corner, the second coming when cutting in off his wing in a set-piece move and scoring under the bodies of several opposition players.

Part of his celebrations must have been fuelled by the relief of playing for England again. In the build-up to the game, it was uncertain of what the implications would be of further Covid-19 cases in the England camp.

With Owen Farrell having tested positive from a test conducted on Thursday, the team did another round of lateral flow and PCR tests. Some of the fear that loomed was that more cases could have been found, but instead there was a clear bill of health and George Furbank started at fly-half.

“It was stressful,” May said after the game. “It is hard enough preparing for a Test match without all (of that). On Thursday morning we have got a positive in the camp, we are about to train, and we have all got to go back to our rooms and have PCR and lateral flow and we are not sure if we are going to train.

“In 20 minutes, the message comes out we have got to race down and get to training, all PCR, everybody is nervous. What if another positive comes back? Are we going to get a game in?

“Then Owen has obviously got a positive test back, it looks to all accounts to be a false positive and that is a different discussion. I was worried about coming down to breakfast this morning and the game not being on if we had a few more positives. To perform under those conditions and distractions is credit to the team.

“It didn’t knock us off our stride, but it was a distraction that we dealt with, and it was challenging.”

May’s try-scoring exploits last season were one of the few joys in England’s calendar year. At times able to conjure something out of nothing, the Gloucester flyer sitting a firm second in England’s try scoring charts.

Above him is only Rory Underwood, whose England career ended in 1996 when the former British and Irish Lion was 32. That is just a year older than May is now and to score 15 tries to overtake Underwood seems like an implausible feat at best.

Despite his consistently good form, May is quick to point out that he is merely the beneficiary of his teammates.

“There is no algorithm in rugby to work out who is going to score tries in what shape or form unfortunately,” he said.

“The most important thing is not any individual, it is the team scored tries, the team scored some good tries, lots of different types of tries, our maul was good, we moved the ball well.

“We probably went through a bit of a sticky patch at the start of the second half, but they are difficult games, they can make it difficult. Nut to stay in there and pick up at the end is a nice way to finish.

“The next couple of games are going to be different challenges, so we are going to have to get better, work hard and get back here in a week’s time.”

So, what of next week’s opposition?

They play Scotland tomorrow in Edinburgh, their last outing coming a week prior against Japan in a game the Wallabies won 23-32. Having improved vastly under Dave Rennie’s leadership as of late, it certainly feels as though next Saturday’s Autumn Nations Cup campaign will be more of a challenge than this one’s.

Reintroducing a raft of European-based talent after several members of their squad decided not to venture north – Will Skelton, Kurtley Beale and Rory Arnold all joining up – the team look to be building well ahead of another tilt at the Webb Ellis, with May wary of what could come.

“They look like a bit of a new team as well,” he said. “They have turned a corner and are playing some good stuff.

“I know there’s two more games to go, but let’s take a breath, get our recovery in and try to enjoy it. It is a new England, and I am grateful to still be a part of it and I am pleased for all those young boys who got out there and really expressed themselves.

“I am happy we have got fans back in the ground and we have made our friends, family and fans happy.”