Meet the Scotland starlet who has had a 2018 to remember 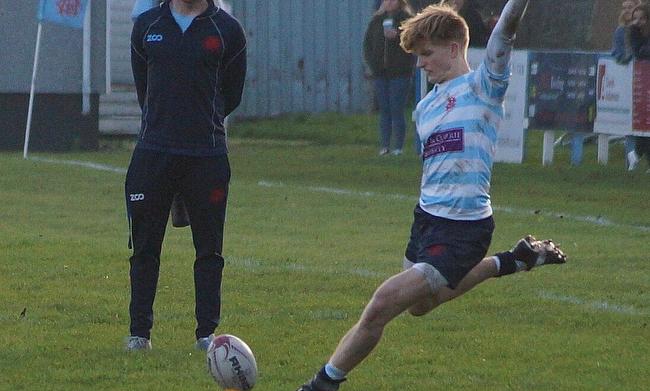 Up-and-coming talent Harry Paterson will head into this coming weekend’s Scotland under-18 festive training camp with a spring in his step having been exposed to senior rugby while still at school in recent months.

New Scotland under-18 head coach Ross Miller will run the rule over a 40-man squad of Scottish based players during a two-day training camp at the Sportscotland National Sports Training Centre in Inverclyde on Saturday and Sunday.

Following the camp, a series of training weekends will take place throughout the early part of 2019, integrating identified SQ [Scottish Qualified] players into the programme culminating with the Six Nations festival in April with games lined up against Italy, Ireland and Wales.

The squad will also play an international against England in March at Billingham RFC.

And Paterson, the 17-year-old Fettes College pupil who mainly plays full-back, will be one of the players looking to impress Miller having made his Tennent’s Premiership debut for Edinburgh Accies against Stirling County last month.

Congratulations to Harry P for being selected in the Premiership dream team, on his debut for the @EdinburghAccies 1XV. https://t.co/szSs3IpoVp

“When I was told by Edinburgh Accies’ head coach Derek O’Riordan I was going to be starting that first XV game against County it was a great feeling,” Paterson told TRU.

“I was quite nervous as kick-off approached, but I feel I did quite well in the first half and then, in the second half when we came back into things, I managed to score a try which was a pretty special moment for me.

“In the end, we lost the game [County won 31-23 and heading into the festive break Accies were still bottom of the table and winless], but we gave them a real scare and played some good rugby and we will be looking to do that again from January onwards when the league gets going again.

“Being a youngster and still at school, I was a bit worried that it might be hard to fit in when I started senior training at Accies earlier in the calendar year, but the coaching structure, the culture that has been created at Raeburn Place and the fact that my brother has played for the club, really has made it easy to settle in.

“Obviously I have had to get used to the more physical nature of the rugby at senior level compared to what I have been used to at school, but the senior players have all been great with me and have helped me to learn quickly.

“Before it got called off, I was also due to play for the first team against Boroughmuir just before the break and in that one I would have been in the back three with Edinburgh Rugby winger Tom Brown [available to the club via the pro draft system] and just watching how these guys go about their business is helping me to get better.”

After his top team debut for Accies, his head coach O’Riordan said: “Harry can be very pleased with how he did. He handled the situation well and it is good to be working with him.”

Rewind a few years and Paterson’s love of the sport began when he was a pupil at the Edinburgh Academy junior school, playing there and for the Edinburgh Accies junior section.

As he progressed into high school Paterson, whose father used to play for Heriot’s, switched schools to Fettes and continued on his rugby journey.

He began to play for the school team while also turning out for the BATS - a link-up between Broughton, Accies and Trinity which sees teams run from under-13 to under-18 levels.

Paterson played stand-off until he was around 15 before moving back to full-back over the last couple of years and he has represented Scotland at under-16 level and was in an under-17 squad before a concussion ruled him out of action at that time.

“The 2017/18 season was a good one for me because I was exposed to first XV school rugby in my fifth year and, playing against some older players and more structured teams, you learn a lot about the game,” Paterson said.

“As we only play one term of rugby at Fettes, I was keen to continue my rugby into the new year so in early 2018 I began to train with Accies because I knew some of the coaches from the BATS and such like.

“I was only 16 at the time so I could not play in games or take contact, but I could still train and I was buzzing to get that chance.

“In the first half of the 2018/19 season, I have been playing school rugby and have also played for the Accies second XV and the first XV.

“I just have to keep my head down now, keep learning and focus on what is to come.”

Paterson does not turn 18 until June 2019, so there are exciting times ahead for him with both club - and hopefully - country.