Mears: 'For me, it’s the closest thing I’ve done which has recreated that wonderful feeling of playing rugby' 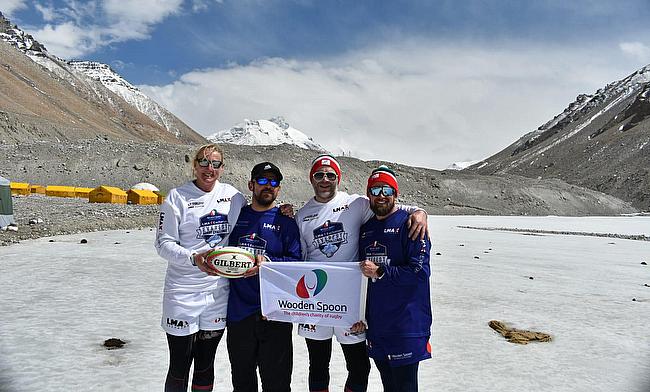 With a Rugby World Cup on the horizon, we are expecting to witness some very special matches later on this year, but at the end of April, two record-breaking games took place.

Bath legend Lee Mears was part of a team of 19 – which included Shane Williams, Ollie Phillips and Tamara Taylor - who climbed Mount Everest as they completed the LMAX Exchange Everest Rugby Challenge.

They were able to break world records for the highest game of rugby at 6,331m above sea level as well as the highest match of touch rugby at 5,199m.

As a result, Mears and the team helped raise over £250,000 for the Wooden Spoon charity which supports disabled and disadvantaged children through rugby.

“For me, it’s the closest thing I’ve done which has recreated that wonderful feeling of playing rugby at international level or having that buzz at Bath,” Mears explained.

“Your back is against the wall. You’re all supporting each other and that is what the challengers really enjoy.

“Wooden Spoon try and do stuff where you bring people together, have a good experience and really make a difference. I did the first challenge in 2015 where we went to the North Pole and the memories you make, as well as raising the profile for the charity, is pretty huge.

“Then it was a case of we’ve done the North Pole, what else is there?! I think it was Dave Mercer from LMAX who said ‘let’s do the highest!’

“I think the total is heading towards £300,000 now! That kind of money in one sitting is huge and you can really do some amazing things with it.”

Mears did take part in the touch rugby game at base camp where in order to earn the new world record, the team had to meet the right criteria when it came to creating the pitch.

“For it to be a Guinness World Record, you have to have your posts and the right pitch dimensions so all the equipment was transported up there as well,” Mears said. “I remember setting up the first pitch down at base camp and my job was to secure the lines.

“One of the things we learnt in the North Pole was the tape blows away in the wind! We asked if we could use spray paint, but obviously being on one of the seven wonders of the world, we weren’t allowed to dye the snow blue!

It’s been BRUTAL. It’s been heart-stopping. It’s been EPIC. We announce today we have broken TWO world records. https://t.co/qCXVGBgG38 pic.twitter.com/2Ln8lPpDkw

“My job was to roll this tape out and secure it with rocks. It was a bit like a moonscape up next to this glacier, but every time I bent down, I got a thunderous headache because the altitude is so bad up there. It took us about two hours to do the pitch!”

Unfortunately, Mears was unable to advance higher up Mount Everest for the second match due to the altitude meaning he didn’t participate in the rugby sevens game at over 6,000m.

The match ended as a 5-5 draw with Shane Williams and Ollie Phillips captaining the two sides and having experienced how tough it was to play in the first game down at base camp, Mears was proud of what everyone involved was able to achieve.

He added: “With the altitude, it was one of the worst moments I have had on a rugby field! I had Shane Williams outside me with all the speed in the world and we had a two-on-one. I knew to draw the defender and pass to Shane with the wheels, but I could see the defender slowly start to drift towards Shane.

“You can’t help it can you! It’s engrained in you! I threw the dummy, he bought it and then I realised what I’d done! It was then a 20-metre stumble to the line!

“Seriously, we are very proud of what we achieved and you could see what it meant to everyone afterwards. A lot of effort and a lot of training had gone into it. I was proud to be part of a world record, but also it was great to have a positive impact on other people’s lives we were with as well as the charity.”

Mears has also partnered up with Williams ahead of the Rugby World Cup as the former Lions teammates went to explore Japan at the start of the year before the showpiece event which begins in September.

1st Day of shooting in Japan with another little legend @ShaneWilliams11 https://t.co/00OR0zfVjR

Mears, who played 42 times for England, is looking forward to the tournament from a supporter perspective and believes it is nicely poised for the main northern hemisphere sides.

“I think it is going to be fantastic,” Mears said. “They [Japan] have got the Olympics next year and they are really ramping everything up which was really good to see. They want to display their country and put on a really good show.

“I think with it being a neutral venue that has never hosted, it will be great for the rugby but also great for supporters. You’ll be getting all the world class rugby and you will be seeing sights you probably have never seen before. They will be really welcome and the Japanese are really respectful.

“As for the tournament, I think England are in good form at the moment. The thing I am most excited about is the main northern hemisphere teams. For me, they all have a good chance.

“Normally you go into the tournament and hope one of England, Ireland, Scotland or Wales can go far in the competition, but this year, we will definitely be there or thereabouts. I am hoping it’s England!

“I think the southern hemisphere have got a bit of catching up to do and that’s why I think it is going to be such a good World Cup.”