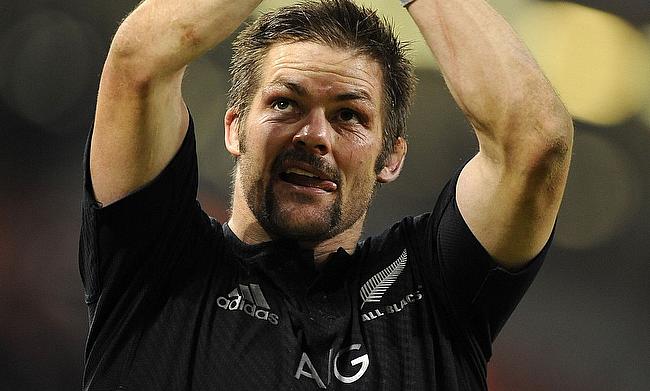 Richie McCaw has banned all talk of his world record 142nd Test appearance ahead of Saturday's Bledisloe Cup clash with Australia in Auckland.

The All Blacks captain will surpass Brian O'Driscoll's current mark of 141 Tests this weekend, but has sought to talk down praise in the build-up.

All Blacks boss Steve Hansen admitted 34-year-old McCaw has been shunning every distraction since making his Test debut against Ireland in 2001.

Australia stunned New Zealand 27-19 last weekend in Sydney with their first win over the All Blacks in four years: now McCaw and friends are out for revenge.

"He's putting the team first and it's another day at the office where he's got to play well and that's how he's looking at it," said Hansen.

"And I think if you look at all his Test matches, that's how he's looked at every one of them."

McCaw himself knows full well his All Blacks career cannot carry on forever, but is at pains to put all that to the darkest recesses of his mind.

"I really want to be trying to go out and train as hard as I can so I can play well on Saturday," said McCaw. " And when you keep that focus you don't get caught up in the what-might-bes or whatever, and that's the reason I've been saying that because it is just the way it is.

"I want to enjoy the chance to play here again and when you have a loss like last week it makes you want to play even more.

"There's no doubt when you play for the All Blacks here it feels like a great place to play. There are other stadiums in New Zealand but this one has got some special memories.

"I love playing here in front of your home crowd. However many thousand get in here it is a great occasion to play rugby. It's great we've got an opportunity with the Bledisloe on the line, it couldn't be better."

Hansen branded McCaw "maybe the greatest player" rugby has ever produced, as the All Blacks continue to build towards September's start to the World Cup.

"He came out of the blue in 2001 and he's gone on to probably be, definitely I think in modern terms anyway, the greatest rugby player New Zealand's ever had and maybe the greatest player to have ever played the game in the modern era.

"The thing that I marvel at is the quality of the performance week in, week out.

"It's always well into the 90 per cents. To be able to do that is pretty remarkable; extraordinary really."

Wallabies boss Michael Cheika has made six changes to the side that saw off the All Blacks last weekend, hailing the impact of flanker David Pocock ahead of his 50th cap.

Quade Cooper and Matt Toomua replace Bernard Foley and Matt Giteau in midfield, while monster lock Will Skelton starts alongside James Horwill in the second row.

"David has had to overcome some hurdles with regards to injury to reach this milestone but the way in which he's got there through perseverance and a lot of hard work and patience is a great measure of his character," said Cheika.

"He has been one of our best players this season, and the respect he commands from his team-mates and peers is a testament to the way he approaches the game.

"He knows that he will play a pivotal part in closing the match on Saturday night, and I expect he will put in a performance that all of Australia will be proud of."