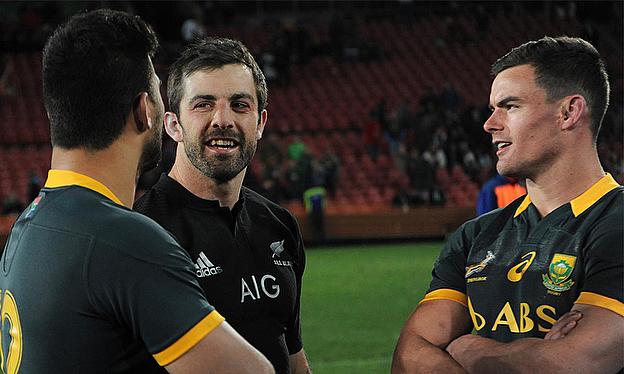 Ellis Park played host to one of the most compelling international matches of the last few years on Saturday, as New Zealand came from behind to beat South Africa, 20-27, in an enthralling contest.

The Springboks were on top for much of the match, but the All Blacks showed their uncanny ability to dig out results from the brink of defeat and broke South African hearts with sublime tries from Ben Smith and Dane Coles amongst their 27 points.

Here’s our take on how the 46 men involved in Johannesburg graded out.

The Springbok’s tactical kicking was precise and his forays into the attacking line always brought significant territory gains for South Africa.

Hendricks saw a reasonable amount of ball on Saturday afternoon but was unable to shake consistently shake off the attentions of Charles Piutau and ultimately had a fairly quiet outing.

For the second week running, Kriel was a joy to watch in South Africa’s 13 jersey. The young man scythed through the All Blacks’ defensive line, distributed superbly and even got his hands on the ball at the breakdown.

The Stormer put in his second sublime performance of The Rugby Championship but once again ended up in the shadow of his prodigal partner in the South African midfield. The elusive footwork and piston-like fend of de Allende helped create the space for Kriel to thrive in.

Habana started ambitiously, looking for work off of his wing, but faded further into the game. He did however make a big contribution defensively and chasing kicks.

The fly-half managed the game well and choose his opportunities to spread the balls wisely. The pack, Ruan Pienaar and the centre pairing of de Allende and Kriel all combined to give Pollard a fairly easy ride, despite the loss.

It was another polished performance from Pienaar, who did everything well without excelling in any one particular aspect of the game.

The Beast had the better of Owen Franks throughout the All Black’s time on the field and then successfully saw off his replacement, Ben Franks, before making way for fresh legs.

Aside from an errant pass and a Kieran Read-stolen lineout, du Plessis had a fine game. The Shark made a big contribution at the set-piece and was a menace to contain in the loose, offloading out of contact with abandon.

The tighthead backed up an impressive display against Australia with a similarly eye-catching performance against New Zealand. He scrummaged very well against Tony Woodcock and made a real nuisance of himself at the breakdown.

Etzebeth had his much anticipated match-up with Brodie Retallick and for the most part, came out on top of the Kiwi. Etzebeth’s ferocious tackling and rucking helped keep the Springbok pack on top throughout and he was one of the more unlucky players to end up on the losing side.

The Cheetah filled in admirably for Victor Matfield, calling the shots at the lineout and consistently making ground with his carries both in the tight and in broken field.

Brüssow was impactful at the breakdown, whilst his defensive work and carrying around the fringes were also noteworthy. His run of success against the All Blacks may have ended, but he gave Heyneke Meyer plenty to think about ahead of the Rugby World Cup.

The flanker was regularly alongside Brüssow, trying to get his hands on the ball at the contact area, and though he didn’t have quite the same impact as he did against Australia a week previous, he certainly did his reputation no damage with a solid outing.

Long gone was the Burger of old who would put his head down and carry the ball into the midst of the defence, the veteran back rower helped pick apart the All Blacks with measured distribution, constantly shifting the point of contact.

The fullback struggled to positively impact the game early on and when his loose pass was turned-over and ended up with le Roux galloping over the try line, he seemed to fade out of the game.

Smith looked dangerous when he got his hands on the ball and provided an excellent kicking option from within New Zealand’s 22, despite being moved from his more accustomed position at fullback.

Struggled to deal defensively with de Allende and Kriel and strayed offside on several occasions, but he also helped spark some of New Zealand’s best attacking forays in his role as a second playmaker in the back line.

Nonu struggled to live with the elusive running of de Allende and Kriel, missing a number of makeable tackles on the pair, and failed to repay them in kind with his own carrying.

Didn’t see as much of the ball in attack as he would like, but the winger was very strong defensively against Hendricks, as well as being solid under the high ball.

There are far easier venues to make your international debut in than Ellis Park, but Sopoaga coped well with the expectation and atmosphere. He didn’t pull the strings in the same way Dan Carter or Beauden Barrett might, but in fairness, his pack really gave him very little to work with.

Smith injected plenty of tempo into the All Blacks with tap penalties and sniping runs, but unfortunately for the scrum-half, many of his teammates seemed to be a step or two behind him.

The loosehead did not have the impact he would have liked, taking his place in a New Zealand front row which was significantly outplayed by their Springbok counterparts.

Coles had a busy outing at Ellis Park but it was his superb line and resulting try early in the second half that really caught onlookers’ attention. The score proved pivotal come the final whistle, whilst his defensive work was as proficient as any other All Black forward.

The Crusader struggled to cause Mtawarira any problems at scrum time and was fairly quiet around the park.

Retallick didn’t have a bad game by any means, but by his own high standards, he was subdued. The lock was unable to dominate the game in his usual fashion, as the All Black pack spent the majority of the game under the cosh.

After being rocked early on by Etzebeth, Broadhurst recovered to enjoy a solid, but albeit fairly innocuous debut for the All Blacks.

The blindside tackled fiercely, making a number of thunderous hits on South African ball carriers, and did the energy-sapping defensive work which kept his side in a game in which they were considerably outplayed.

A tireless performance that was deservedly capped with a try. McCaw was a brick wall defensively and, like Messam, helped keep New Zealand in the game when South Africa were dominating both possession and territory.

With Sam Whitelock on the bench, Read stepped up at lineout time, not only providing Coles with a viable target, but also pressuring on South African throws.