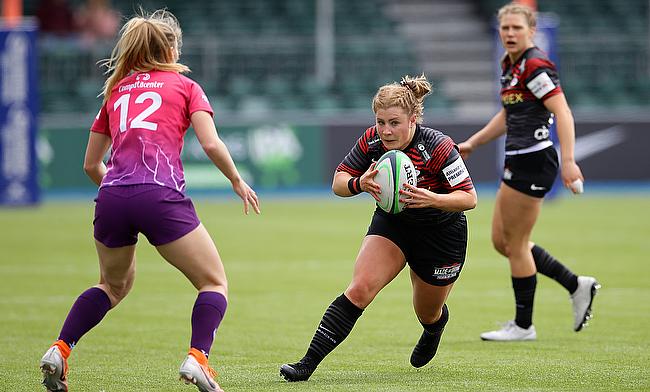 May Campbell has been in great form this season
©Wired Photos

Bath Rugby launch women's team in a bid to join Premier 15s from 2023
Harriet Millar-Mills Exclusive: Somebody has got to break the cycle and support the game
Hannah Jones: Stand-in skipper looking to help ‘elusive’ Welsh backline click
Vicky Fleetwood Exclusive: Global competition can create a brighter future for players

When the final whistle blew at the end of last Saturday’s cracking Allianz Premier 15s semi-final at the StoneX Stadium between Saracens and Loughborough Lightning, home hooker May Campbell was delighted for two reasons.

One, the team had battled ever so hard to see off their opponents 28-24 and two, her parents Carola and James were there to see her play.

“During most of this season, we have had no fans in the grounds that we have been playing in so to be playing at the StoneX in front of our home fans last weekend was just amazing and helped us get over the line,” Campbell told TRU this week as Alex Austerberry’s charges prepare for Sunday’s final against Harlequins at Kingsholm which is set to be played in front of 3,276 spectators.

“My parents used to come to as many matches as they could pre-Covid and, with restrictions easing now, they were able to make the long drive down from just outside Dunblane in Scotland to watch us play against Loughborough.

“As soon as the final whistle was blown, I went over to the sidelines to find them and it was so good to be able to give them hugs as they have been my biggest supporters over the years.

“The plan is that they will be at Kingsholm on Sunday to watch me play in the final. Mum seems to be sorting all the logistics out and having them there again will mean a lot to me.

“It is certainly going to be a tough game against Harlequins because they are a very good side and, like us, have been up the top end of the Premier 15s since the competition began three seasons ago.

“In that time everything has come on at all of the clubs, so although we have great facilities, great coaching and access to S&C coaches and physios, we have known that every time we have taken to the field this season that it was going to be a tough match no matter who we were up against.

“When we played Harlequins in March, we drew [17-17] so that is how closely matched the teams are and we just have to focus on our processes and getting things right on Sunday.”

They say in rugby that any good team is built on a solid pack of forwards - and that is certainly the case at Saracens.

“I was the only starting forward without a full international cap to my name,” former England under-20 Campbell, now 25, said.

“In fact, all of the forwards on the bench [Scotland’s Jodie Rettie, England’s Rocky Clark and Rosie Galligan and Wales duo Donna Rose and Georgia Evans] have full caps too so to have players of that experience around me is great.

“To play in a pack of forwards with such quality is amazing and I like to think I bring something to the party too and have really been enjoying my rugby in recent months.

“I just try and do my job for the team and winning on Sunday would be the best way to finish off the campaign.”

Campbell’s journey from Scotland to the StoneX

As mentioned, Campbell has previously been capped by England at under-20 level, but she grew up in Scotland and started playing the game at Stirling County.

“We lived just outside Dunblane when I was growing up and my parents and my uncle took me down to Stirling County and I really enjoyed it,” the player who has worked in the city and is now working as a nanny, recounts.

“I went on a lot of the mini rugby tours and liked playing with and against the boys and then when I went to secondary school in the Lake District, thankfully Keswick School had a good girls rugby section and I took things on from there.

“I represented the region and then when I was 16, I went to Hartpury College to do my A-Levels. I didn’t actually get into the rugby programme at Hartpury straight away, but in my first term, I worked hard and showed the coaches what I could do and then they brought me in to the programme which meant I could dedicate more time to my rugby.”

Watch all of the action from the nail-biting semi-final win on Saturday!#StrongerTogether ???? pic.twitter.com/ZuWGiSkIiD

Next up for Campbell, who has always played hooker, was a move to London to study sports science and business studies at Brunel University.

“Coaches at Saracens somehow got wind that I was moving to London and invited me along to training and things went from there pretty quickly,” she explains.

“This is now my fifth season at the club and we have such a close-knit bunch who want to get better each week and that drives me on to keep doing my bit for the side. We want to keep setting the bar high for women’s rugby in England.”

The Allianz Premier 15s final between Saracens and Harlequins takes place at Kingsholm on Sunday with a 4pm kick-off and is live on BT Sport.