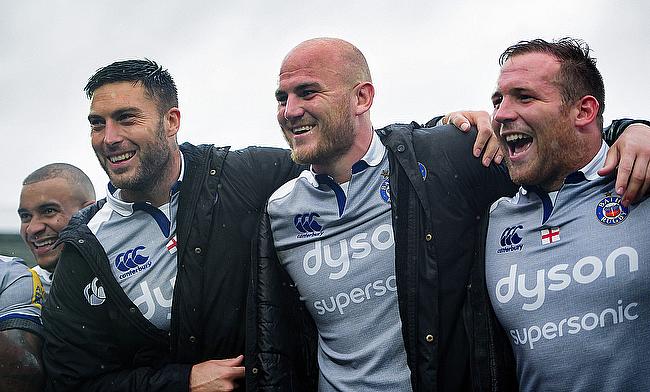 After seven years in the blue, black and white of Bath, Matt Garvey's time with the Somerset side came to an end last week.

Arriving for the 2013/14 season from London Irish, he came to The Rec with Exiles teammates Anthony Watson, Jonathan Joseph and David Sisi.

His first season at the club was respectable, but it did end early due to injury whilst his second term was maligned, not by a spell on the sidelines, but by the arrival of Sam Burgess from rugby league.

Burgess would only last for one season in rugby union as his enjoyement for the sport was ruined by the media and disagreements with the club’s hierarchy which in turn, saw Garvey installed as the blindside-elect, even filling in at lock when needed. Injuries were few and far between for the player, his performances earning him the captain’s armband and confirming his status as a club favourite.

In January 2019, Garvey would suffer an ankle injury. At first, it was predicted that he would be out for three months, but in reality, it was 11.

Returning to play in November of last year, Garvey became a regular for the side once more, but he would not be offered a new contract with the club, something that the 32-year-old was told in late February, prior to lockdown measures.

“I came back, played eight games and Covid hit,” Garvey, who made over 100 appearances for Bath, said.

“It was just before Covid hit that I was trying to get the conversation with the club going, trying to find out what was going on and there was no real chat going on. When I found out in February, I was quite down about it because it is a club where I played for seven years, played quite a few games, made a lot of good friends, but that is the part of the business that rugby is now.

“I understand how the business works and if you find a younger player, someone that offers something different that the club wants to go for, that is fine. You want to be told early enough so that you can find something else. Being told in February, Covid hit straight away, so it has not been the best time to be out of contract, but I wish all the boys well.”

During Garvey’s time with Bath, he had three Directors of Rugby which led to a constant chopping and changing of tactics and personnel.

He worked under Mike Ford, Todd Blackadder and Stuart Hooper and as a result, Garvey believes this could be a reason why he, and several other experienced campaigners, are leaving The Rec.

“I was there for seven seasons and I have been under three Director’s of Rugby, so there was never really that consistency, everything was changed every couple of years,” Garvey, who also captained the side for two season, said. “There were some players that I felt still offered quite a bit, whether that was not necessarily starting, but definitely as a back up or a squad player, there were definitely a few that shocked me.

“The number that was leaving, compared to the number they brought in was quite a shot. I think it was 16 out and three in I believe. There were some players that could offer so much more, but like I said nothing really surprises me anymore. I have been a professional for 11 years, it gets to that difficult period where clubs have to make announcements and it happens, I guess.”

Garvey is now on the search for a new club after his release this time last week. At the age of 32, he still feels that he has plenty to offer a professional side. The only thing working against him is Covid-19 and the financial uncertainty of many clubs as to what they can immediately offer players. Sticking to road running for now in order to keep fit, Garvey says he has had good interactions with clubs so far.

“I have had positive conversations with a few clubs, I have had offers in the past, which have either not worked out or been pulled for different reasons because of the financial implications from a club’s point of view,” Garvey said. “It is probably the worst time to be out of contract and I know many players who are going through similar things. It is far from ideal, but I’m still being patient.”

Unfortunately, as Garvey alludes to, he is not the only one in this position. There are athletes across the country at a crossroads, unsure if they will line up as professional rugby players again. Last week, we saw a mass exodus of players from Leicester Tigers, many of them unable to agree new terms on a contract that would see their wages reduced in an aim to secure the long-term future of the club they represented.

These re-negotiations have been seen across rugby and Garvey has been at the heart of it. After relinquishing the captaincy at Bath last summer, he became his side’s representative for the Rugby Player’s Association. Quite the year to do so. With 11 years as a professional player underr his belt, until his final day with Bath, Garvey was helping relay information to players about their rights and the steps recommended to them.

“Being out of contract, I still needed to look out for them (his former Bath teammates), do my role and it just changed on a daily basis,” Garvey said. “Clubs were doing different thigs, Premiership Rugby would put out something different and then the RPA would have to change their message. It was ever evolving, the situation changing on a daily basis, which made it so difficult.

“There were people on the outside looking in saying that a 25% pay cut still leaves them with a lot of money and it is better than not having an income. I don’t think it was a question of the players taking a pay cut, I think it was how it was handled by different clubs, by Premiership Rugby. It was all put on the players, that they had 24 hours, 48 hours to make a decision. You do it or you walk.

“It all got really ugly. As a player you have two strengths; your contract, which is in black and white and your ability to turn up to work or not. If the club is turning around and saying that they know they are breaching your contract, but they have to or they won’t survive, your strength of contract goes out of the window. Then, you’re at home because of lockdown, you can’t turn up for work. You are left without any strength, which made it really difficult.”

A recent criticism of the game’s governing bodies in England is their communication with other key parties. Darren Childs, CEO of Premiership Rugby, broke his 100 day media silence last week, much to the amusement of many in the press as well as social media users. With it uncertain when Saracens can take part in the Championship due to their obligation to finish the Premiership season, Garvey says that all players require is more clarity and more than just a date of August 15th to begin playing again.

“Sometimes the RPA would be the last ones to find stuff out,” Garvey said. “It seemed like Premiership Rugby would report directly to clubs and we would get whispers from clubs and different reps and have to piece it all together. It would have been good for us to have an equal share of the dialogue so we can understand the situation and get ahead of it.

“In sport, you can hear one thing from your team, but one of your best mates will play for someone else and is being told something different. Why are they being told that? Why are we not all being fed the same message? There is so much uncertainty still now. How many games? Which season? How many games a week? There is still so many unanswered questions. The boys don’t know.”