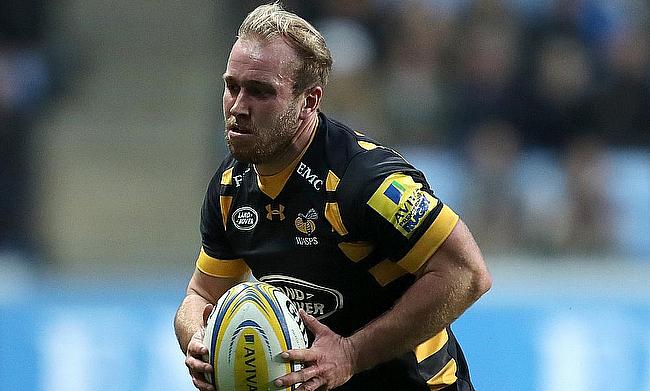 Wasps secured their place in the Premiership playoffs with a 46-5 win over first place Exeter Chiefs at the Ricoh Arena.

With Sale still yet to play, one of Bristol, Bath or the Sharks will be coming to visit Wasps next weekend as the Blue, Black and White drew at Saracens whilst the Bears sealed a bonus point victory over London Irish.

In the opening 40 minutes, it was one way traffic. Wasps went into the break 25-0 up, but their lead did come as somewhat of a surprise.

The game opened with plenty of kicking from each side, but the hosts went in front thanks to two penalties from Jimmy Gopperth, the veteran’s boot as metronomic as ever. The opening try came from his young apprentice, Jacob Umaga, who acrobatically touched down for a converted try.

Wasps’ lead was extended when Dan Robson pounced on a loose pass that Don Armand had fumbled and the England scrum-half was able to go over the whitewash unopposed. After two more points for Gopperth from the tee, he would score five for himself, gathering a Matteo Minozzi offload to drop over.

Wasps were keen to secure the bonus point as soon as they could, to put even more distance between themselves and the chasing pack and Josh Bassett was the man who would dot down after another opportunistic score from Lee Blackett’s side.

Exeter showed some shoots of recover after the break, but after the ball had gone forwards, Gopperth launched a move which ended with Bassett touching down. Exeter would get some form of consolation when replacement loosehead Danny Southworth powered over after several tap and go attempts.

The hosts would extend their lead further when replacement scrum-half Ben Vellacott dotted down. The former Gloucester number nine scored after a spell of consistent pressure from Wasps on the try-line and Gopperth added a final two points.

Vellacott would have even more reward as the clock counted down. As Tim Cardall broke through, the half-back was on hand to receive an offload and he darted over, with Rob Miller's conversion rubber-stamping their home semi-final spot.

When the team sheets were released for this game, anyone associated with Wasps must have had a sigh of relief. Exeter had gone noticeably light, with just a few Premiership regulars involved in the matchday 23.

For the home team, it was merely business as usual. In their past three games at the Ricoh, Lee Blackett’s side have scored an eyewatering 159 points. Today, 46 of those points were scored, the fourth try guaranteeing a home semi-final next weekend against either Bristol, Bath or Sale.

Considering where the team where when Blackett took over earlier this year, his influence on this side has to be held in higher regard. Wasps have grown and grown since lockdown and are thoroughly deserving of a spot in the top two.

Unlike Exeter, Blackett has not been fighting on two fronts, with Rob Baxter clearly preparing for the semi-final next week and then the Champions Cup final on October 17th in Bristol. When his preferred XV line up next weekend, it is unlikely that any of the 23 from today will even be at Sandy Park as the Chiefs aim for another visit to Twickenham.