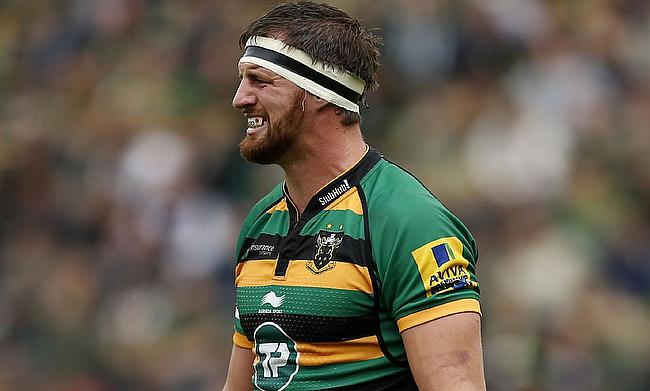 Tom Wood was one of the try-scorer for Northampton
©PA

Northampton Saints managed to hold off Wasps as they sealed a 30-25 win in the latest round of the Gallagher Premiership at Franklin's Gardens.

This is 11th win for the Saints from 20 games as they have now sealed a place in next season European Champions Cup while Wasps are at eighth place with 43 points.

The game also saw Northampton co-captain Alex Waller make his 300th appearance for the club while Api Ratuniyarawa featured in his 100th game. Sam Matavesi started the proceedings as he went over at the back of a line out in the third minute and Dan Biggar followed with the conversion to give them a 7-0 lead.

Courtney Lawes made his first appearance for the Saints since the Boxing Day and he straightaway made an impact with a well timed offload to allow Dan Robson to touchdown in the 20th minute and Jacob Umaga followed with the conversion to level the scores.

The 25th minute saw Umaga sin-binned after he played the ball in an offside position close to his own line and the referee also awarded a penalty try for the home side making it 14-7. Despite down on numerical advantage, Wasps went on to level the scores again with this time skipper Brad Shields driving over from a line-out move and Charlie Atkinson improved making it 14-14.

As the break was approaching, Biggar and Umaga, who returned from sin-bin traded penalties as the scores were levelled 17-17 at the end of the opening half.

Biggar with an early penalty in the second half put the home side into a three-point lead but that came after Zach Kibirige's try for Wasps turned down due to a forward pass. As the final quarter started, Biggar and Umaga traded penalties to make the scoreline 23-20 before Tom Wood dived from a close range after pouncing on a loose ball to dot down in the 70th minute and Biggar improved making it 30-20.

Biggar left the field limping creating a concern for the British and Irish Lions head coach Warren Gatland but the Saints managed to hold on to the victory despite Wasps managing a late try through Tom Willis.