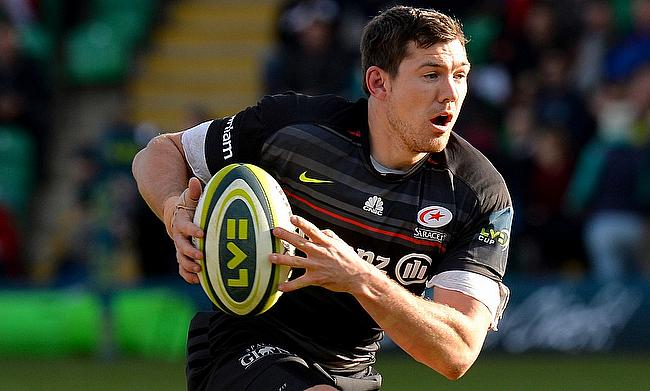 Saracens scored two tries in the final 10 minutes as they earned a hard fought 36-21 win over Newcastle Falcons in the latest round of the Gallagher Premiership at Kingston Park on Saturday.

This is 12th win for Saracens in 18 games as they consolidated their second position with 64 points - six ahead of third positioned Harlequins while Newcastle are languishing at 12th with 26 points.

Newcastle off to a flying start as as George McGuigan dived over at the back of a rolling maul in the 4th minute and Will Haydon-Wood kicked the conversion but the scores were levelled inside 15 minutes as Tom Woolstencroft patiently waited for the maul to creep over, and dot down for his 10th try of the season. Goode's conversion meant the scoreline was 7-7.

The lead once again tilted towards Newcastle with Haydon-Wood kicking back to back penalties in the 18th and 22nd minutes but their momentum was hampered by a yellow card to Mike Brown in the 26th minute as he batted away Alex Lozowski’s grubber when Rotimi Segun was certain to score resulting in a penalty try for the visitors making it 13-14.

Haydon-Wood with another penalty in the 27th minute after Saracens were penalised for a high tackle kept Newcastle in a 16-14 as the first 30 minutes of the game came to an end. Saracens thought they got their third try through Aled Davies but a knock on prevented a certain score.

With another break provided by Jackson Wray, Mark McCall's men won another penalty which Goode kicked to perfection as Saracens edged into the break with a slender one-point lead.

Saracens extended their momentum into the second half as Elliott Obatoyinbo crossed for their third try in the 43rd minute and Goode followed with the conversion making it 16-24. McGuigan came close to scoring but was held up before the line but he could not be prevented from scoring his second try of the game in the 52nd minute as he dived over from a resulting maul.

Haydon-Wood missed out on the conversion as Newcastle continued to trail by three points as the final 10 minutes of the game kicked in. As a penalty was kicked in the corner, despite the maul being held up the ball was recycled and Rotimi Segun burrowed over making it 21-29 and the bonus point was sealed in the 77th minute Goode with his 50:22 took his side up towards the line before getting assistance from Davies to dot down as McCall's men completed a 15-point victory.