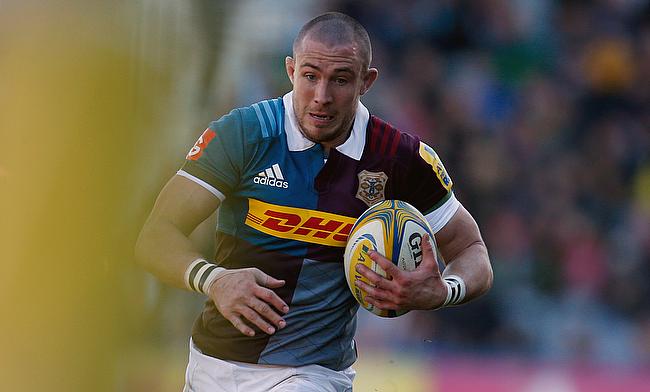 Mike Brown was one of the try-scorer for Harlequins
©PA

Harlequins managed to hold off Northampton Saints as they sealed a 37-19 win in the 12th round of the Gallagher Premiership at Twickenham Stoop on Sunday.

The win has taken Harlequins to the third place in the table with 38 points while Northampton are at fifth place with 31 points.

Marcus Smith started the proceedings with an early penalty but in an eventful next 12 minutes saw both the sides score two tries apiece. The Saints were the first to strike when Fraser Dingwall and Sam Matavesi combined to send Tom Collins over the line for an unconverted try.

Quins were presented with an opportunity when an error from Harlequins allowed Danny Care to offload to Tyrone Green for their opening try in the 8th minute. Smith kicked the conversion and also slotted another two-pointer in the 11th minute after Care was once again instrumental resulting in Stephan Lewies dotting down making the scoreline 17-5.

Northampton though fought their way back with this time Tom James capitalising on a well-timed pass from George Furbank to crossover and Rory Hutchinson kicked the extras as an eventful opening quarter ended with a 17-12 scoreline.

The home side ensured they increased their lead further around the half hour mark when Mike Brown scoring their third try in the 32nd minute while Smith followed with the conversion and also a penalty goal to take Harlequins to 27-12 lead in the first half.

Northampton reduced the arrears to eight points after a poor pass from Green allowed winger Ollie Sleightholme to score and Hutchinson improved it making it 27-19 before Smith kicked his third penalty goal making it 30-19. The lead for Harlequins could have extended further when Smith touched down but was ruled out by TMO for a forward pass.

Harlequins suffered a double setback when Jack Kenningham and Dombrandt were sin-binned in the 65th and 68th minutes but Northampton could not quite find any more breakthrough despite the numerical advantage. The home side eventually claimed the bonus point when Brett Herron went over in the 80th minute as Harlequins returned back to winning ways with a 37-19 victory.