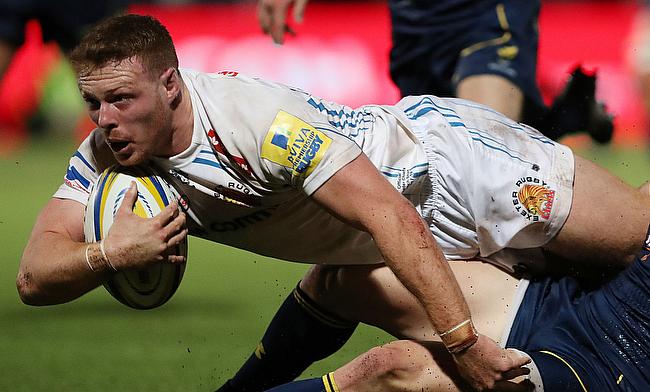 Exeter Chiefs returned back to winning ways as they defeated Bath Rugby 38-16 in the latest round of the Gallagher Premiership at Recreation Ground.

Stuart Hooper's men raced to a 13-point lead in the opening quarter but could not build on to their momentum as Exeter dominated the final quarter with four tries to reclaim the second position in the table. Meanwhile, Bath have moved down to 10th place following their seventh defeat.

An early infringement from Ollie Devoto in the 9th minute saw Bath open their account with Rhys Priestland slotting a three-pointer and a minute later the fly-half sent a crossfield kick that was capitalised by winger Ruaridh McConnochie as he went over the line. Priestand also kicked the conversion and followed with another penalty goal in the 19th minute to make it 13-0.

The response from the visitors came in the half-hour mark when Joe Simmonds kicked a penalty to the corner and eventually a well timed pass from Jack Maunder resulting in a touchdown from O'Flaherty. Joe also followed with the conversion as they reduced the arrears to six points.

As the half-time was approaching, Exeter scored their second try with this time Sam Simmonds continuing his impressive run as he dived over following a pass from his brother Joe to make the scoreline 13-12 at the end of the opening half.

Bath were the quickest to get off the block in the second half with Priestland kicking his third penalty kick in the 46th minute. However, that was the last of the points for the hosts in the game as Sam was once again involved in Exeter's third try as he picked the ball from the base of the scrum resulting in a touchdown for Sam Skinner in the 61st minute.

Five minutes later, Skinner doubled his tally with a dive from close range as Rob Baxter's men increased their lead to 16-24 and also secured a bonus point. Any chance of a Bath comeback was put to halt after Jonny Gray and O'Flaherty scored back to back tries in the final four minutes to complete a 22-point victory.