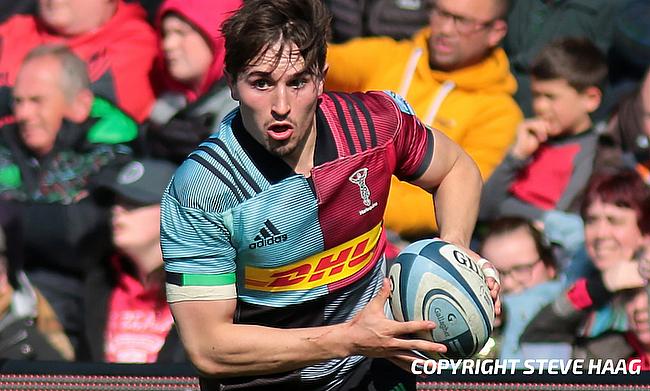 Cadan Murley scored a double as Harlequins managed to beat Newcastle Falcons 24-10 in the 19th round of the Gallagher Premiership at Twickenham Stoop on Friday.

The result meant Harlequins are now on a three-game winning streak as they are at second place in the table with 58 points behind Leicester Tigers while Newcastle Falcons are at 11th position.

It took Harlequins just four minutes to score the opening try as Huw Jones dived on the left at the back of a resulting line out and Tommaso Allan kicked the conversion to make it 7-0.

The visitors had a chance to open their account as they had a chance to kick a straightforward penalty goal which they slotted to the corner and came close but George McGuigan had knocked on much to their disappointment. Nevertheless, they took their second chance as Will Haydon-Wood kicked a three-pointer in the 25th minute to make it 7-3.

The hosts extended their lead further as Murley collected a pass from Danny Care at the back of a driving maul to burrow down. Allan missed out on the conversion but made amends in the 32nd minute as Tyrone Green and Andre Esterhuizen combined to send Louis Lynagh over the line making it 19-3.

As the break was nearing, Newcastle Falcons narrowed down the gap to nine points with Haywood-Wood broke the defence of Harlequins and set up a close-range ruck which resulted in Tom Marshall dotting down. Haydon-Wood also followed with the conversion as the teams went into the break with a 19-10 scoreline.

Harlequins suffered a major setback as they were down to 13 players temporarily as in the 52nd minute centre Luke Northmore was sin-binned for a deliberate knock-on and two minutes later Care also joined him for stripping the ball off McGuigan.

Despite having the numerical advantage, the Falcons did not seize the opportunity and instead Murley completed his second from a line out in the corner after the Quins returned to full strength. Edwards conversion bounced off the post but the Quins went on to complete a 14-point victory.