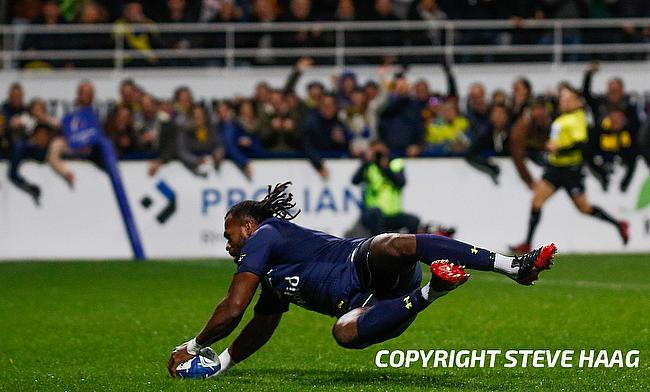 Alivereti Raka was one of Clermont's try-scorer
©Steve Haag

Clermont secured their first win in the ongoing Heineken Champions Cup as they edged out Sale Sharks 25-19 in the recently concluded clash at Stade Marcel-Michelin.

Clermont are at seventh place in the Pool A table while Sale Sharks are at sixth position. Racing 92, Ulster and Stade Rochelais have already secured a berth in the round of 16 clash in the group.

Sale made the most of the opening exchanges as Jean-Luc du Preez went over in the fifth minute but Rob du Preez missed out on the conversion. The response from the home side came in the 12th minute Fritz Lee sprinted to touchdown and Camille Lopez's conversion gave them a slender two-point lead.

They further extended their lead in the 22nd minute with Damian Penaud showing his brilliance in setting up winger Alivereti Raka over the line making it 12-5 before Sale Sharks fought back with winger Thomas Roebuck gathering to dot down on 25 minutes after a nudge through by centre Robert du Preez and a tremendous offload from Tom Curry.

Around the half-our mark, Bevan Rodd breached the defence of Clermont to dot down and Du Preez kicked the conversion to make it 12-19. Nevertheless, their momentum was hampered with full-back Luke James was sent to the sin bin for a deliberate knock-on in the build-up and Clermont did not miss the numerical advantage as Penaud dotted down with the teams heading into the break unseparated at 19-19.

Both the teams were desperate for a breakthrough in the second half and it did not come until the 68th minute when Morgan Parra kicked a penalty goal to put Clermont in front. With no further breakthrough from Sale, Parra's second three-pointer that came in the 73rd minute proved just enough as Clermont completed a six point win.