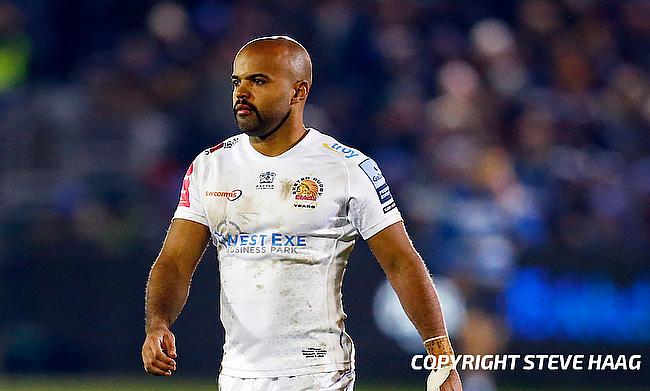 Tom O'Flaherty and Sam Simmonds shared five tries between then as Exeter Chiefs trounced Glasgow Warriors 52-17 in the third round of the Heineken Champions Cup at Sandy Park.

This is Exeter's second win from three games as they are at third position in Pool A while Glasgow are at eighth position.

Glasgow started the proceedings with a seventh minute penalty goal from Ross Thompson but Exeter responded back strong with O’Flaherty scoring his first in the 18th minute after good work from Henry Slade and six minutes later Sam Simmonds dived over at the back of a maul. Joe Simmonds kicked both the conversions as they made it 14-3.

The visitors reduced the arrears with lock Kiran McDonald diving from close range on the 31st minute and Thomspon followed with the conversion making it 14-10 by the end of the opening half.

The visitors were the quickest to get off the block in the second half with before flanker Matt Fagerson dot down and Thompson kicked the conversion to take them to a three-point lead but it was short lived as Sam Simmonds burrowed over from close range in the 51st minute with Joe improving it making it 21-17.

The third try for Exeter came in the 56th minute as O'Flaherty capitalised on a cross-field kick from Joe Simmonds to touchdown and three minutes later Luke Cowan-Dickie followed the suit with his try coming at the back of a powerful rolling maul making it 28-17.

The end of the third quarter saw Luke Cowan-Dickie also getting his name on the scoring sheet after a perfectly weighed cross-field kick from Joe and O'Flaherty completed his hat-trick in the 66th minute making it 38-17.

Any chance of a Glasgow comeback was put off with Exeter adding two more tries through Jack Nowell and Dawe Ewers in the final six minutes as Rob Baxter's men completed a massive 52-17 win.