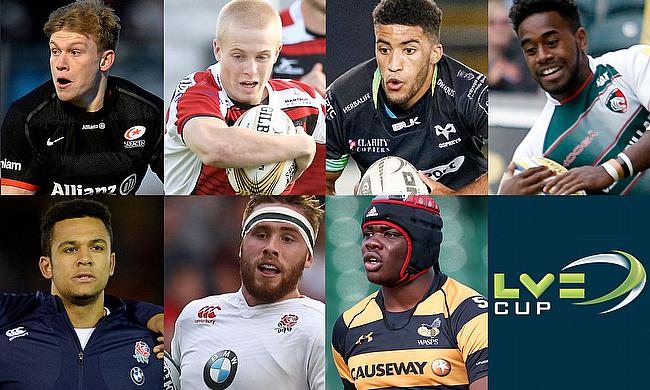 The Anglo-Welsh Cup returns this week and should prove the perfect platform, as it has for several years now, to develop the next generation of English and Welsh Test stars.

The competition was put on a short hiatus during the 2015-16 season thanks to the Rugby World Cup but Saracens, who won the 2014-15 title, will begin the defence of their crown against Gloucester this weekend.

Due to the scheduling of the Guinness Pro12, the four Welsh regions must wait until the first weekend of the November Tests to make their bow in the competition, but they will have their eyes set on taking the trophy back to Wales for the first time since the 2008-09 season.

The tournament has previously helped prove the springboard to higher honours, with Jonny May, Jack Nowell and Ollie Devoto all winning the LV= Breakthrough Player award and then going on to win England caps in subsequent years.

We run through several potential candidates for the award and if you’re scratching your head at the lack of forwards in the mix, this award tends to be won by the more free-scoring, eye-catching backs in the competition.

In other words, it’s not one for the purists.

Tompkins demonstrated his remarkable talent this summer with England Saxons in South Africa and has backed it up since with Saracens, helping them carve open the Scarlets at Allianz Park a couple of weeks ago.

He’s being developed in the ‘Saracens style’, with his defensive press, robustness and kick chase all coming on significantly in the past year, but that has not diminished the innate attacking ability he possesses.

The Welsh-born back was tipped to make the breakthrough at Gloucester last season when he was offered senior terms as a then-18-year-old, but his opportunities were limited to the Aviva A League. With the LV= Cup back, Protheroe has a chance to make a strong claim for playing time.

His counter-attacking ability at full-back, not to mention the kicking game he has honed at fly-half, make him a valuable weapon to the Cherry and Whites and he is the epitome of elusive when he gets the ball in his hands.

Giles makes it into this shortlist, but with a bit of a caveat that he may not actually feature in the competition. He has been called up to train with Wales for the November Tests – albeit not part of the squad – which could prevent him from playing in the first block of fixtures. The latter blocks could be impacted by possible selection for Wales U20s.

In addition to those two international considerations, Giles is making himself invaluable to the Ospreys senior team and it may be that he gets pushed forward into first XV rugby in the Pro12 and not required in the cup fixtures.

Leicester have been losing talented academy prospects over the last 12 months and they need to stop that haemorrhaging soon. Giving players the opportunities they crave in the Anglo-Welsh Cup will help with that goal and there are few players as ready for an opportunity as Yawayawa.

Yawayawa’s tries were key to taking Leicester to third in the Aviva Academy League last season and he has the kind of footwork and turn of pace that can leave defenders looking silly. With the depth in Leicester’s pack, Yawayawa should be able to work off the front foot in the competition.

If you combine Kibirige’s try-scoring ability with the plastic pitch in place at Kingston Park, Newcastle are potentially sitting on a very effective player. His chances are limited to displace the duo of Vereniki Goneva and Sinoti Sinoti on the wings in the Premiership, but he can heap the pressure on with his performances in the cup.

After scoring arguably the greatest age-grade try of all-time against Wales in the U20 Six Nations, Kibirige’s career has been stalled by injury and off-field distraction but if he can rediscover the form that had him tipped for greatness a year or two ago, he could light up the competition.

If history is anything to go by, neither of these two forwards will be in the mix to win the award, but keep an eye on them, as they are two players on the verge of breaking out.

The versatile lock-blindside caught the eye in this summer’s World Rugby U20 Championship, not least so when he outran the entire Italian team to a memorable try in the group stage. He is one of the new breed of forwards who possess incredible athletic prowess, even though they have frames which are built for the attrition of modern forward play.

Nott could grab himself plenty of tries and put himself in the mix with eye-catching attacking play, but his work at the lineout and the breakdown will be just as, if not more important to his long-term development.

The England U20s haven’t done much wrong over the past five years but their strict adherence to sticking with the players who come from the U18 system may be one in the case of Ehizode. The Wasps lock was exceptional in the academy competition last season and compared very favourably to when Maro Itoje was 18 and playing in the same competition.

Ehizode’s lineout work, carrying and defence were all superb and he earned himself A League playing time as a result, something which he has continued to accrue this season. With no England U20 duty, the Anglo-Welsh Cup could be just the platform Ehizode needs.

When not with the A League, Ehize also works on his craft in the resilient rugby of the National Leagues with 2 North's Leicestershire side Hinckley.