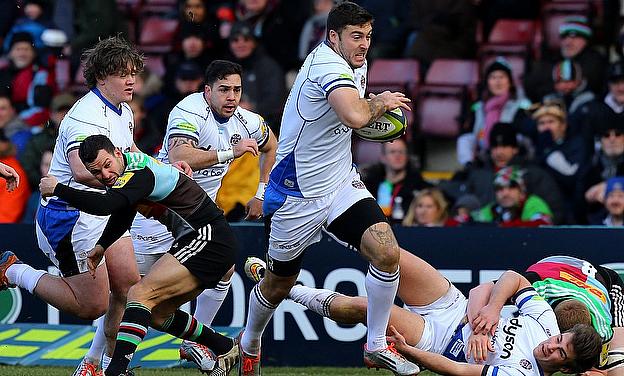 Debutant fly-half Rory Jennings landed a late penalty to hand Bath a hard-fought 23-21 LV=Cup victory against Harlequins at the Stoop.

Bath registered scores from Matt Banahan and a penalty try, while scrum-half Will Homer kicked 10 points for the visitors.

Bath were handed the perfect start when Karl Dickson spilled the ball in the Quins 22 after Tom Casson was charged down from the opening kick-off. The visiting pack got a great shove on in the ensuing scrum with referee Ben Whitehouse awarding a Bath a penalty. Homer stepped up to give his side an early 3-0 lead.

Quins' poor start continued when Dickson fired a wayward pass into midfield gifting Bath possession. From the ensuing turnover, Max Clark offloaded to Banahan who waltzed through the Quins defence to score under the posts. Homer added the extras as Bath found themselves 10-0 in front with less than four minutes on the clock.

Quins came roaring back into the contest in the 24th minute, however, when winger Williams raced over in the right corner thanks to great hands from Evans and Casson in the build-up.

All the momentum was now with the home side with sustained pressure from the rejuvenated Quins pack allowing Evans to draw the sides level at 10-10 with a 29th minute penalty.

Quins' comeback continued when Dickson fed Walker who crashed over in the left corner. Evans hit the post with his touchline conversion as Quins established a 15-10 lead.

Homer reduced Bath's deficit to two points before the break after Quins prop Darryl Marfo was penalised for failing to release at ruck-time.

Evans added a penalty early in the second half with Homer dragging a three-point effort wide after a scything Horacio Agulla break forced Quins offside.

Evans added another penalty on the hour mark but failed with a reasonably easy effort three minutes later as Quins edged out to a 21-13 lead.

But Bath responded with a series of powerful scrummages under the Quins posts giving Whitehouse no option but to award the visitors a penalty try. Homer's conversion ensured there was just one point between the sides with 10 minutes remaining.

Jennings had the final say with his winning kick after Quins were caught offside following a powerful Banahan break in the dying stages.