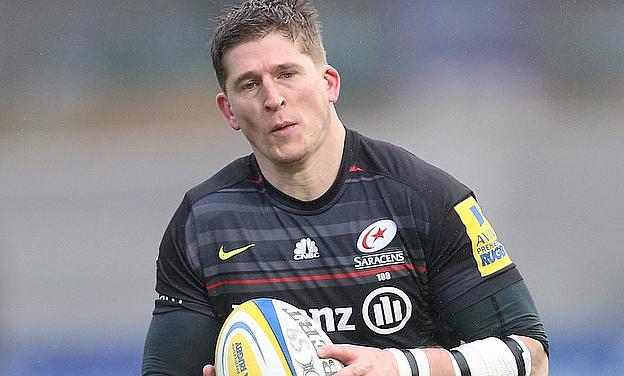 Rob Baxter's side could not follow up last season's success as they struggled to cope with a powerful Sarries outfit who were able to call upon the services of England internationals Alex Goode, George Kruis and David Strettle as well as Argentina centre Marcelo Bosch.

Tries from Strettle (two) and Nick de Jager did the damage with Ben Spencer adding eight points from the boot.

Bodilly's early error handed Saracens an attacking scrum when the Exeter full back's long kick went dead in goal. The Sarries pack capitalised on their first set-piece and decimated the Chiefs pack allowing Ben Spencer to post the first points of the afternoon.

The Chiefs responded immediately with winger Tom James making a scything run through the Sarries defence before he was hauled down inches short of the line. Sireli Naqelevuki, Jerry Sexton and Ben White carried on the attack before Brett Sturgess was held up over the line. Their efforts did not go unrewarded, however, as Sweeney kicked a three-pointer to level up the scores.

Sarries were dealt a big blow just before the break when Spencer was sent the sin-bin for failing to roll away at the ruck following a powerful break from powerful Chiefs centre Hughes. Sweeney made no mistake from the tee to give his side a deserved lead heading into the break.

Sarries began the second half a man down but it was the Chiefs who found themselves under pressure as Strettle intercepted White's wayward past to sprint over for the opening try of the game. Goode, who had replaced winger Mike Ellery late in the first half, could not add the extras from the touchline.

Strettle soon has his second try as the Sarries winger pounced on Spencer's perfectly-weighted kick to touch down in the left corner. Goode failed with the extras once more but it mattered little as Saracens established a 13-6 lead.

Saracens were in the ascendancy and, following a superb break from Spencer, flanker De Jager powered over from close range in the 62nd minute to further extend his side's lead.

But Exeter came roaring back into the contest as Bodilly went crashing over in the corner following a superb long pass from James. Steenson fired over the touchline conversion to make it a seven-point game with 10 minutes remaining.

The Chiefs were playing with their tails up and monopolised possession in the closing stages and they soon had their crucial touchdown as Bodilly crashed over again. Steenson fired over the conversion to cap off a superb comeback from the Chiefs.

Spencer had the final say, though, as he held his nerve to kick a last-minute penalty to break Chiefs' hearts and secure the title for Saracens.