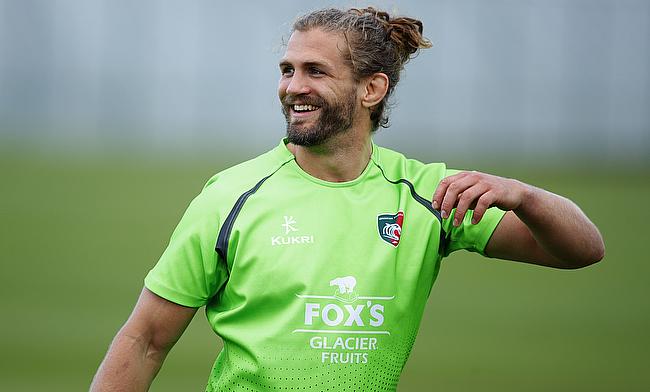 It was obvious to Luke Wallace from the moment he first stepped into the Championship that he wanted to return to the top-flight as quickly as possible.

After a stint with an ambitious Coventry side, the former Harlequin is now back where he feels he belongs after joining Leicester ahead of the Gallagher Premiership restarting in just under two weeks.

On Wednesday, the 29-year-old was introduced to the media as a Tigers player for the first time and whilst his move to Welford Road may not grab as much national attention as the club’s other recent signings, Wallace brings a wealth of experience and talent to an already exciting back-row.

“It is definitely good to be back in the Premiership,” Wallace said. “That was always the goal last year going to Coventry to play as well as I can and get back into the Premiership as fast as I could.

“It has just worked out that it is just a small jump across to Leicester. Coventry and Leicester trained together a few times last year and I always made sure I spoke to the coaches after that so I think that may have played a part.

“I want to stay in the Premiership as long as I can because it is the best place to play rugby and the hardest league in the world.”

Conversations with Leicester’s Director of Rugby Geordan Murphy, someone Wallace played against in the early stages of his career, paved the way for him to return to the Premiership but the forward admitted moves to Japan and the USA were also potential options following his departure from Coventry.

Instead, Wallace opted to stay in the Midlands and swapped the Butts Park Arena for Welford Road following a one-year absence from English rugby’s top division.

In truth, the back-rower may not reflect on his time in the Championship with much fondness due to the challenges which second tier clubs have been faced with over the last 12 months.

In February, the RFU announced they would be cutting its funding to Championship teams by 50 per cent whilst the financial impact of Covid-19 means a large chunk of sides are now having to operate on a part-time basis.

Coventry also spoke about the need to reduce their squad size due to this unprecedented situation and whilst Wallace fell under that bracket, he says the second tier of rugby needs to be cherished.

“With the cuts that happened earlier in the year from the RFU, it shows that it [the Championship] is not valued as much as it should be,” added Wallace.

“It is frustrating to see all the plans they [Coventry] made to try and push to the Premiership pushed back two or three years. They have such a strong squad that is very committed to their goal and to see that pushed back a few years is tough for the boys.

“I obviously played in the Championship 10 or so years ago for Esher and it is such a valuable tool for young players, especially young forwards who might find it a bit harder to step right into the professional game. It is such a valuable tool to get game time and learn about physicality and learn about men’s rugby and obviously it was key for me last year as well to get the chance to come back up so it should be treasured for sure.”

Over the last couple of weeks, plans to revamp the Championship have emerged with former Saracens CEO Ed Griffiths proposing a conference-based model which would see the league spilt between the north and the south.

Wallace once again reiterated the importance of ‘having the Championship’ and whilst he is preparing for life in the Premiership, he admitted he did learn a few things from his short spell in the second tier.

He added: “It is a slightly different game. That’s what I worked out quite early on! It is much more set-piece to set-piece and probably a bit more structured. It probably didn’t suit my game in that respect. We never went through enough phases for it to break up enough for my skillset to really excel, but I definitely got used to tackling harder more often and hitting those easy targets, but there is still a lot to be learnt in the league for sure.”

After a decade spent with Harlequins in the top-flight, Wallace is now looking forward to his new challenge with Leicester Tigers.

The Midlands club are hoping to turn their fortunes around in the remainder of this current season and new head coach Steve Borthwick has seemingly already had an impact on his playing squad.

Wallace revealed the former England forwards coach conducted an inspirational speech on the terraces at Welford Road and Wallace has been impressed by the energy and enthusiasm around the club.

“He gave a really inspirational speech,” said Wallace. “We spoke about the DNA of old Leicester and taking the good from that and adding a new DNA.

“I’d compare his arrival to the impact Paul Gustard made at Quins, the whole energy around the building changed instantly.

“I played at Welford Road a lot and normally Quins turned up! It was always a place I loved to play. The crowd is amazing and the atmosphere is always great. There was definitely a big draw to coming to a club like this to know that history and wanting to be a part of it.

“We spoke about Leicester being a working-class town and the fans expecting us to work hard - and I can tell you we have been putting in the work for the last few weeks!

“I have come here to play and there will definitely be opportunities in this run in over the next two months because of the way the scheduling is. It is up to me to make the most of those chances when I get them.”

Leicester resume their Gallagher Premiership campaign away to Exeter Chiefs on August 15th.