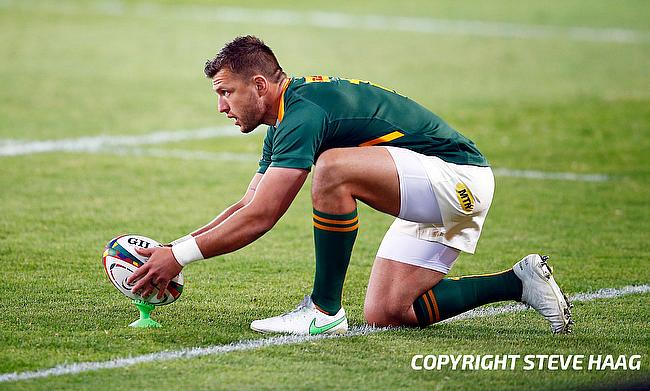 Leicester Tigers have announced the signing of South African fly-half Handre Pollard ahead of the 2022/23 season.

As reported earlier, Pollard will make a switch to the Gallagher Premiership club from French club Montpellier which he joined in 2019.

The star fly-half has played 60 Tests for the Springboks and featured in all the three Tests during the recently concluded November series. The 27-year-old started his career with Bulls and also had a stint with Japanese side NTT DoCoMo Red Hurricanes Osaka in 2015.

“I am excited to join Leicester Tigers, to be a part of this great group of players at a special club and challenge myself, test my limits and be the very best I can be for the team," he told the club's official website.

“The club is going brilliantly at the moment and I know there is an expectation to continue that, to keep getting better because getting to the top is hard but staying there is even harder.

“There are bigger deals on the table, but I’ve made this decision to work with Steve [Borthwick] and to be a part of an unreal, great club at Leicester Tigers which has such a great history,” he added.

Leicester Tigers head coach Steve Borthwick welcomed Pollard to the club and is confident that his experience will be a huge boost.

“Handré is a world-class fly-half who brings with him a wealth of experience from Super Rugby, Top14 and international rugby.

“He is a World Cup winner who has been highly sought-after from clubs all over the globe. But, most pleasingly, he sees Leicester Tigers as the club for him.

“What has impressed me most in our dealings with him has been his desire to be a part of what we are building at this club but also his desire to develop, learn and grow as a player and person.

“This is a very exciting signing for the club and one I hope Leicester Tigers fans are excited about.”

Leicester Tigers currently hold the top place in the Gallagher Premiership table with nine wins from as many games.