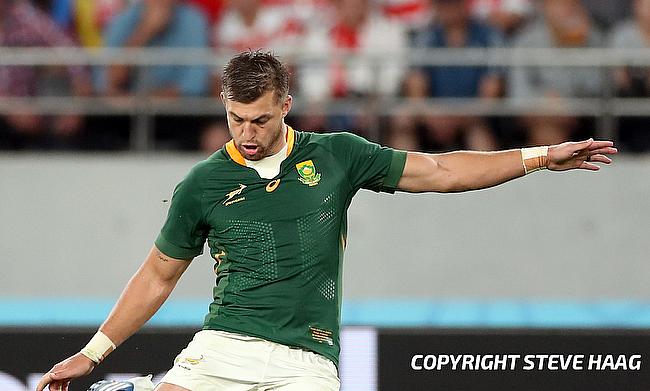 South Africa fly-half Handre Pollard could make a move to the Gallagher Premiership after he has been linked to Leicester Tigers according to reports.

With George Ford set to make a switch to Sale Sharks ahead of the 2021/22 season, it is understood that Pollard, who was part of the victorious World Cup campaign of the Springboks has been on the radar of the Tigers.

According to the Rolling Maul podcast, Pollard has already signed a deal with the club with an official announcement expected this week. It is also understood that the 27-year-old has agreed to 'about £600k' contract over £1m which is being offered in Japan.

“The word on the street, if you wish to believe it, is that Pollard is a done deal and we ( Leicester Tigers) will be announcing him either Wednesday or Thursday this week and I’ve had that from two different sources. The two people who have advised me that it’s happening are pretty trustworthy guys, they’re not someone to billy bulls**t on this sort of stuff. If they’ve heard a whisper themselves, I trust them if they think there’s enough truth in it to do it and it’s not just mindless gossip,” said co-presenter Elliot Butlin.

“The proof is in the pudding, we will have to keep our eyes open to see if it happens this week, if the rumours are to be believed, we are signing Pollard on Wednesday or Thursday this week. Salary for about £600k, which is considerably less than what Japan was offering, which was £1m, so he’s coming not for the money but for the project. Apparently the presentation that was given to him by Steve and the club is was what sold it to him, he was really impressed by what we were saying and he’s buying into the project and the journey, so to speak, we are embarking on,” he continued.

Pollard started his career with Bulls and also had a stint with Japanese side NTT DoCoMo Red Hurricanes Osaka in 2015. He is currently part of French side Montpellier which he joined in 2019.

The star fly-half has played 60 Tests for the Springboks and featured in all the three Tests during the recently concluded November series.