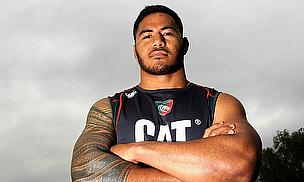 Manu Tuilagi was the man of the match, scoring two tries for Leicester
©Press Association

Reigning Aviva Premiership champions Leicester put four tries on Wasps to keep up the pressure on second-placed Northampton with a 27-15 win at Welford Road.

The bonus point means they now trail Northampton by just two points with three games to go ahead of the Saints clash with leaders Saracens tomorrow.

"Job done, we will take maximum points, which is pleasing, but it was a bit of a non-event.

"We were okay, they were okay, but it wasn't very fluid. Quins next week is a big game. We have got a nine-point cushion on them but we have still not qualified for the semi-finals, we are not home and dry.

"We have put a bit of pressure on Northampton but they are still in the box seat for a home semi-final. We have to keep winning and see what comes."

"We are disappointed we did not get a losing bonus point.

"We were right in the game until the end. I thought we frustrated Leicester for large parts of the game, but we let it slip away from us."

Leicester, thanks to tries from Tuilagi and Goneva, both of which were converted by fly-half Owen Williams, led 14-10 at half-time.

Wasps' scored through flanker Thompson while ex-England and Leicester fly-half Andy Goode landed the conversion and a penalty.

Apart from the tries, the first half had little to excite the fans, littered by mistakes, but Leicester would have been the happier side, Goneva's try in injury time helping them overturn Wasps' 10-7 lead.

Goode had put the visitors ahead in the fourth minute with a penalty and Leicester didn't score until the 19th minute, Williams scuffing a shot at goal five minutes earlier.

Their try came from a rolling maul which drove Wasps back, after which scrum-half Ben Youngs darted left and set Tuilagi free with a superb pass.

Williams converted but Leicester were quickly on the back foot and Wasps thought they had scored through Will Helu only for the television match official to rule it out.

Seven minutes later they did cross, flanker Thompson taking advantage of a poor tackle from Blaine Scully and Goode added the extras.

Although they were not at their best in attack, Leicester took the lead at the very end of the half after Tuilagi and full-back Mathew Tait setting up Goneva to score despite the best efforts of James Short and Thompson.

Williams added the conversion from the left touchline.

Eight minutes into the second half, Tuilagi was on the scoresheet once again, scoring in trademark style with two defenders hanging off him, Williams missing the conversion.

Both sides made a raft of changes as the heat began to take its toll, Wasps throwing on England lock Joe Launchbury and another England second row Geoff Parling, made his comeback for Leicester following injury.

Williams made it 22-10 to Leicester with a penalty from long range in the 65th minute but Wasps were not done yet.

After Elliot Daly chipped through, Bell picked up to score before Joe Carlisle missed the conversion.

Two minutes from time Leicester put the seal on the win when Mélé scored following a rolling maul and with the bonus point secure, Williams missed the conversion.