Eyes on Europe for mid-table trio 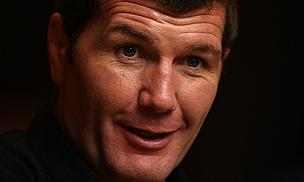 Aviva Premiership's seventh-placed side Wasps, Gloucester in eighth and Exeter Chiefs one place behind now have an eye on Europe following the creation of European Rugby Champions Cup.

After a two-year deadlock was broken and the future of European rugby secured, the team that finishes in seventh place will play off against their French counterparts for a place in next year's premier European competition with the top six teams qualifying automatically.

Wasps currently sit in the key seventh position but are under threat from Gloucester and Exeter.

And the Chiefs could move above the London side if they can beat Worcester Warriors at Sixways on Saturday.

"People are aware there's a play-off for the seventh-placed team to get in the new European competition so I'll be disappointed if we're under-motivated for the game," Exeter head coach Rob Baxter said.

"Worcester have got a great motivation as they have given themselves a real lifeline with their win at Newcastle."

Worcester captain Jonathan Thomas has urged his side to follow up on their 17-12 win away at Newcastle with another strong performance as they try to save their Premiership status.

They are nine points behind Newcastle but they face fixtures against Bath and Saracens in the remaining four games, making their task an enormousy difficult one.

"It has obviously been a frustrating season," number eight Thomas said.

"Losing every week is tough but in the last two months we have really improved and we have been really unlucky.

"We will go into the game trying to win and confident that we can."

Gloucester's push to reach seventh place begins when they host Bath in the west country derby at Kingsholm.

"That performance, particularly the first half, was unacceptable and the players have to react to that," the Cherry and Whites boss said.

"Bath is a huge game for us, regardless of last weekend, regardless of what type of season we've had. The Gloucester-Bath game is the biggest game of our season."

Wasps, who have a three-point advantage over Gloucester with Exeter one point further back, head to Leicester, resting in-form number eight James Haskell and naming England lock Joe Launchbury on the bench.

Away from the scrap for the European Champions Cup play-off, Saracens host Northampton at Allianz Park in a match that many are predicting will be a dress rehearsal for May's Premiership final.

"It's a big game, first against second. We understand that against them there will be only one important match, which will be the semi-final or the final," Saracens director of rugby Mark McCall said.