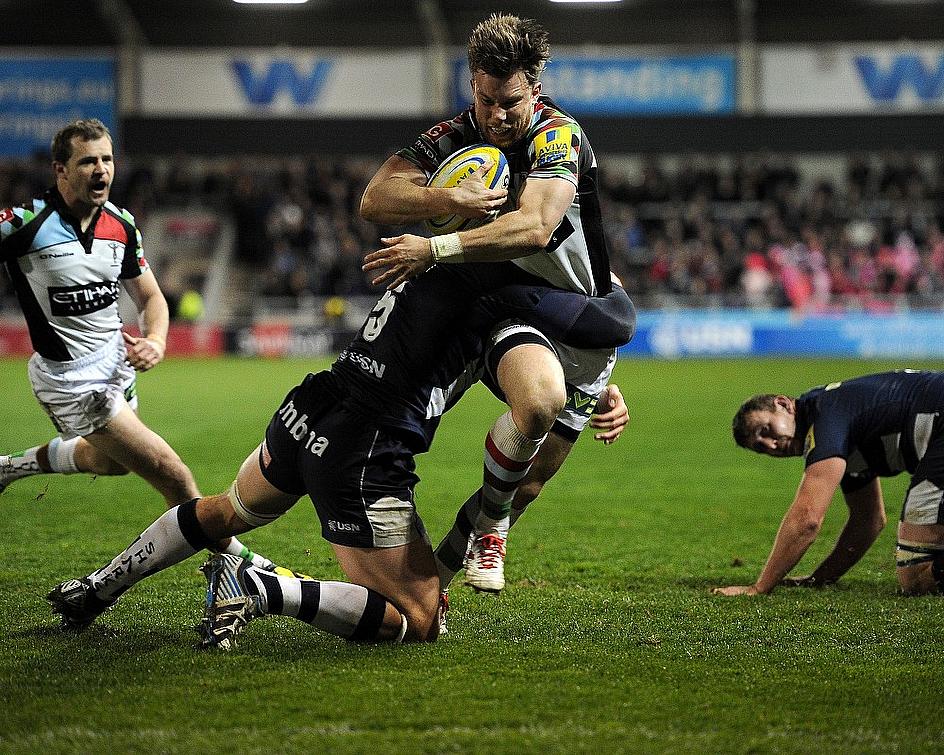 Harlequins' Sam Smith touched down to put Harlequins in the clear 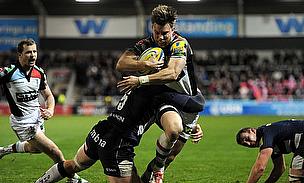 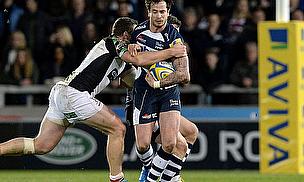 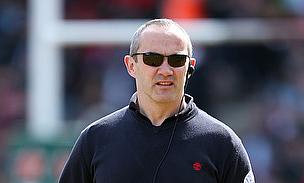 The Sharks went 5-0 early on before Quins hit back to lead 15-5 at the break thanks to tries from Danny Care and Nick Evans.

Good work in the second half from Quins saw further tries from Sam Smith and Maurie Fa'asavalu to put the game out of Sale's reach.

The home side registered a penalty try late in the game but the result puts Harlequins up to fifth in the table, one place ahead of Sale.

Both sides looked to move the ball wide from the start with Johnny Leota and Tom Brady making breaks for Sale and Mike Brown doing likewise for the visitors.

O'Shea ready for fight "to the bitter end"

Following this win, Harlequins director of rugby Conor O'Shea says his side is ready to fight "to the bitter end" to secure a Premiership play-off place.

"We're not going to talk about challenging for anything, it's game-by-game. We'll go to the bitter end and, if we play with an intent and intensity, we are a decent side.

"Our squad have been incredible, we've had to fight tooth and nail because of what we've been through injury-wise and are still going through.

"This squad is incredibly tight and they love a challenge. We've given ourselves a mountain but we're going to fight every single step of the way.

"I just like it when we're mentally sharp, when we're going for it, taking quick lineouts and looking to challenge the opposition all the time.

"We've got one ferocious challenge coming down to the Stoop next week (when we play Leicester), but I think the crowd will know that we're back."

Sale made the first decisive move when Brady touched down in the right-hand corner following a move that saw Danny Cipriani, Sam Tuitupou and Tom Arscott heavily involved.

Cipriani missed the tricky conversion but it was an ideal start for a side that had won six of their previous seven games.

The visitors responded strongly and with their internationals gelling well once again, they were a force throughout the night, and swiftly equalised as Evans spotted a gap and touched down.

He added the conversion and a penalty to put Quins 10-5 up after 19 minutes.

Brown, Care and New Zealand centre Tim Molenaar were beginning to dominate the game and scrum-half Care finished a move that he had started in his own 22.

Sale were slow to react to a quick line out and paid the penalty following a superb attack which went through several phases.

Quins remained in control and Smith crossed for their third try in the left-hand corner before Sale found some fight.

Tuitupou and Dwayne Peel made incursions into Quins territory until a knock-on at the base of a ruck prevented Brady from notching up a second try.

That proved to be a key turning point as Quins regained their composure and secured the bonus-point score through Fa'asavalu.

Charlie Matthews was sin-binned for Quins late on and after a number of infringements on their own line, referee Wayne Barnes penalised Quins and awarded Sale a penalty try, but it was nothing more than a late consolation.