Kelly Brown: ''You have to make sure that as a coach you keep evolving, you can't stand still" 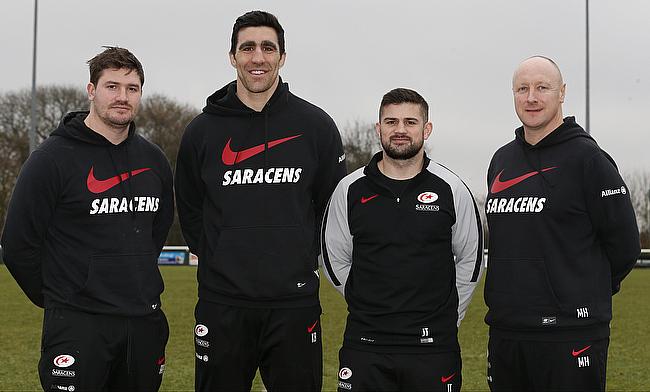 Kelly Brown was never a man to take a backwards step as a distinguished player over the years for Melrose, Border Reivers, Glasgow Warriors, Saracens and Scotland.

And with the former back-rower, 37, now about to enter his fourth season of coaching with Saracens he is not about to stand still now - he wants to keep progressing and learning within an ever-changing sport.

Along with forwards coach Brown, the others staying for the next four years are academy manager Mike Hynard, senior academy coach Adam Powell and backs coach James Tirrell.

The quartet played a major part in the success of the Academy players progressing to the first team in 2018/19 with 14 featuring across the Gallagher Premiership, Heineken Champions Cup and Premiership Rugby Cup.

The team reached the final of the latter and won the Premiership Rugby Shield while 11 of the 23 involved in the club’s European Cup-winning matchday squad had come through the Academy pathway with 10 included in the Premiership final.

All of which has left Brown buoyant ahead of 2019/20 and he told TRU: “It is brilliant to be staying at Saracens.

“Last year was a decent year at the club, the first team did well, the back-up guys did well and it is really exciting that four of us have committed to the Academy for the long-term.

“In my final season as a player [2016/17] I split my time between playing and coaching while I have now had two full seasons as a coach and I am loving the challenges that it throws up.

“I work with the under-18s, the senior Academy guys and do some work on contact with the first team squad. Such is the nature of age-grade rugby, the junior Academy can be quite fluid with players coming in and out at different times, but we can be working with around 50 guys at any one time.

“There are then about 17 guys in the senior Academy aged between 18 and 22 too and I love working with players at different stages of their development.

“In terms of the under-18 guys, I love working with them because they are so keen to learn and you can use your experiences to really help them come on.

“They grow not just in terms of learning the rugby detail, but also as people and to see the change of a player from the under-16s, into the under-18s and then into the senior Academy is really fascinating.”

We often hear that the way Saracens players act on and off the pitch is why they are at the top of the tree when it comes to European club rugby and Brown is keen that those behaviours trickle down to the younger players in the set-up.

“We talk a lot about behaviours, they are so crucial,” he stated.

“There are things you need to have and do from an early age if you want to have hopes of kicking on and playing for the first team and then perhaps earning international honours.

A Champions Cup final that will live long in the memory ??

Saracens produced a magnificent display to come from behind and defeat Leinster at St James' Park...

Relive an intense and dramatic contest in 60 seconds ?? pic.twitter.com/1QIXCE0r0q

“The values of the club are very important to us. We speak about competitiveness and we speak about work rate which are vital traits that our players must have if we are to move forward.

“We do things well at the club, but things are constantly evolving and if we stay where we are come five years’ time, then it won’t be good enough.

“You have to make sure that as players and coaches you always want to be better and you have to keep evolving, you can’t stand still.

“I have learnt a lot in the last three years when it comes to coaching. The great thing here at Saracens is that all of the coaches love what they do and like to deal with players who might have a totally different personality to the guy next to them to help them be the best that they can be.”

“Gregor has created a great environment”

As a result, he knows the mental and physical turmoil the extended squad members with the national team will be going through this summer in their bid to make it onto Japan for the showpiece event starting in September.

He also does a bit of contact coaching with the Scotland squad under head coach Gregor Townsend and said: “I used to quite enjoy the build-ups to World Cps because I liked training and getting fitter.

“Some of the guys will enjoy it, some won’t so much, but they have a really good pre-season plan in place.

“They are three weeks in now and are currently on a break and when they get back the work they will do will definitely help them when it comes to the big matches in Japan.

“Gregor has created a great environment and the players really feed off him and his energy. These are exciting times for Scottish rugby.”