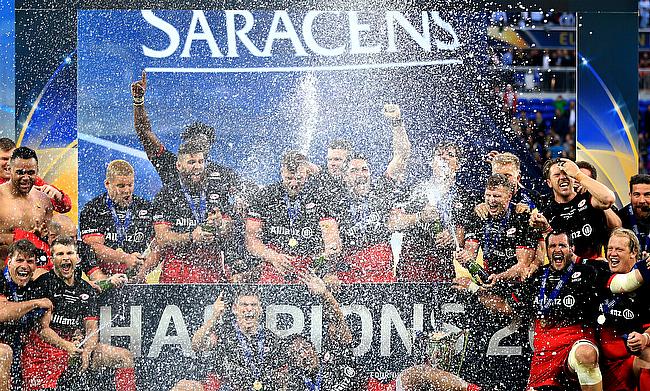 Sean Maitland and Billy Vunipola scored tries as Saracens went on to clinch their third European Champions Cup title after beating Leinster 10-20 in the final at St James' Park in Newcastle on Saturday.

This is Saracens' third Champions Cup title victory in four seasons after previously emerging winners in the 2015/16 and 2016/17 seasons. This was also the Allianz Park outfit's first win over Leinster in Champions Cup and they couldn't have chosen a better time than this.

Johnny Sexton started the proceedings with a fourth minute penalty goal and as both the teams competed hard to find more points, it was Leinster, who had a slender three point lead in the opening 30 minutes.

The intense battle heated up further when Saracens lost Maro Itoje to sin-bin in the 30th minute and Tadhg Furlong used the numerical advantage as he dotted down in the 32nd minute and a conversion from Sexton made the scoreline 10-0.

Just as it looked like the Irish side would be heading into the break with an advantage, the Sarries made a terrific comeback with a Sean Maitland try that had a conversion and a penalty from Owen Farrell on either side as the scores were levelled 10-10.

As both, the teams were desperate for an early advantage in the second half Leinster's Scott Fardy was yellow-carded in the 58th minute and a penalty goal from Farrell took the Sarries into the lead. Saracens continued their occupancy in Leinster 22 and eventually, their attack proved dividends with Billy Vunipola scoring the decisive try with 13 minutes to go and conversion from Farrell ensured Mark McCall's side completed another title win.