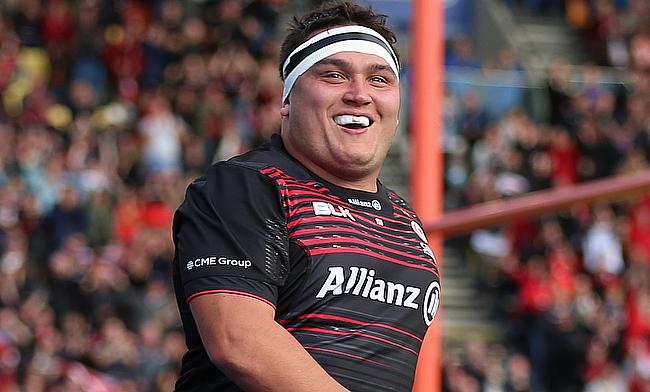 Jamie George scored a couple of tries as Saracens went on to edge out Exeter Chiefs 34-37 in the final at Twickenham Stadium to win the Premiership title.

This is Saracens' fifth title win in last nine seasons and with a European Champions Cup triumph also they completed a double - a repeat of their heroics in the 2015/16 season.

The high intensity encounter started with Exeter attacking pushing Saracens off to the back foot and the pressure yielded the result with Nic White going over the line in the second minute and Joe Simmonds followed with the conversion.

Rob Baxter's men had a setback when Henry Slade was sin-binned for an attempt to stop a deliberate knock-on and Saracens made the advantage count as George dotted down from the resulting maul. Farrell missed out on the conversion but kicked a penalty goal in the 10th minute to take a 7-8 lead.

The Sarries had their second by the 14th minute with Ben Spencer forcing his way over after it was set up by Billy Vunipola. The Sarries were reduced to 14-men temporarily this time with Maro Itoje yellow-carded in the 19th minute and Dave Ewers on his 100th appearance made it count with a 21st minute try.

Exeter continued on their momentum and some intense movements saw Johnny Hill touchdown in the 31st minute following which Farrell and Simmonds traded penalties as the teams went into the break with a 22-16 scoreline.

By the 58th minute, Exeter extended their second with Slade looking sharp to cross whitewash but tries from Liam Williams (60'), Sean Maitland (68') and George (77') followed by triple conversions from Farrell put Mark McCall's men on the driver's seat making the scoreline 27-37.

Sam Hill's try in the final minute brought the game alive once again but despite a conversion from Simmonds, the Sandy Park outfit fell short of their second title win hope by four points.