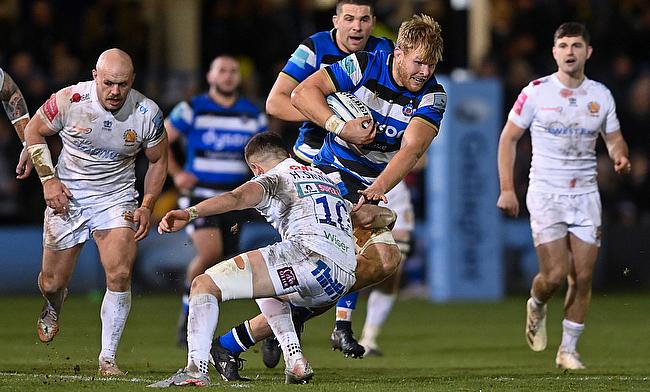 Josh McNally is no stranger to adversity during his professional rugby career.

In 2014/15, the lock forward was part of the London Welsh squad that won no games on their return to the English top flight, and whilst representing London Irish between 2017 and 2019, experiencing relegation again in 2018 before captaining the Exiles back into the Premiership before departing for Bath.

Now having called Somerset home for over two years, McNally and his West Country teammates find themselves at the foot of the Gallagher Premiership table. Having failed to win any of their eight opening domestic fixtures so far this campaign, there is a mountain to climb for those in blue, black and white.

“At Bath, they have got very high expectations, so to lose the first eight league games of the season is pretty tough and everyone is feeling that,” McNally said.

“We know the supporters are feeling that, but us as a playing squad and staff and everyone involved in the organisation are just trying to work hard to get us out of this rut.

“It is easy to look and think results haven’t gone our way, and yes we haven’t won a game, but at the same time where we are with our squad at the moment, we are just trying to keep positive and trying to be as bold and brave to get out of where we are at, in the best possible way.

“I think we are putting down performances that in another day that would warrant a win. I think Friday (16-23 loss to Exeter) would probably back that up and if we had won that game, it would have been fully deserved.

??"The exciting thing for me is that we have a lot of like-minded people at the moment who just want the best for the club"

“A bounce of the ball or a decision, it could be a very different season. I am not saying we could have won eight from eight, but I think we are still putting performances in that could potentially win games. Now, what we are trying to find out is why we are not winning those games.

“Our defence has not been good enough, so it has put is in the position where we are chasing games a lot, but then our discipline hasn’t been great either, so we are gifting other teams’ possession.

“We are not making life easy for ourselves and as an overriding summary, everyone is pushing, everyone is being brave, not going within themselves and only time will tell before we get out of this really.”

Two runners-up finishes have been at the opposite end of the spectrum, but a 13th place finish this campaign would be nothing short of disaster for those at Farleigh House.

Having made largely minimal changes to the playing and coaching staff during the offseason, McNally says the adjustment to how their style of play which they amended in the summer may have taken more time than anticipated, with other aspects of the team’s game not moving to the fore after several months of struggle.

“Taking us back to the start of this preseason, we had a revamp of the way we wanted to play,” McNally said. “We didn’t hide away from that in the press, we were flaunting that away everywhere.

“We knew that was going to take time. Now I think we are embedding that into ourselves, there are some key areas that we needed to address and over the last few weeks we have gone after that.

“We need to sure up our defence, that’s an easy one, we are conceding too many points. I think Exeter showed that we have made significant strides in that and then our set piece hasn’t functioned as well as it should have done.

“Our lineout has taken a bit of a dip in terms of our win percentage, and we are not really challenging enough in a defensive sense and in the way we exit as well. So, the way we receive the kick-offs or the way we relieve pressure from ourselves in our own half. They are the sort of three key areas where we have gone ‘right, this is where we want to go after now’. 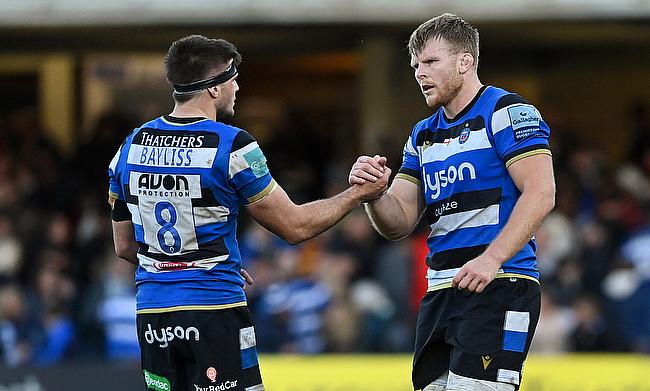 In the summer, Josh Bayliss (left) told TRU that there were plenty of 'like-minded individuals' at Bath
©Patrick Khachfe / Onside Images

“Two of them were fantastic at the weekend, but we let ourselves down in the way we exited from our own half, and we sort of gifted them possession in the wrong areas, so we have worked hard this week and I think we will take another step in the right direction.

“I have not questioned once how the boys have come into work, which is amazing actually. I have obviously been in some teams that have had this sort of form and it can become quite a toxic environment. People start finger-pointing, but here there is a real togetherness.”

Playing Northampton Saints this weekend at cinch Stadium at Franklin’s Gardens, Bath’s trip to the East Midlands is yet another opportunity to get off the mark with a win. Chris Boyd’s Northampton sit fourth in the Premiership table, a somewhat monstrous 21 points ahead of their Somerset counterparts, Dan Biggar starring in their 36-20 win last weekend against Bristol Bears.

Still not far removed from their 71-10 loss at the hands of Gloucester in the Premiership Rugby Cup, Bath can in some ways count themselves lucky that there will be no relegation from the Premiership this season.

More than at ease with dealing with situations when the cards aren’t in his favour, McNally believes that his prior experience is helpful in trying to turn the tide at the Rec.

“I have been part of crisis meetings at London Irish in years gone by where we are not getting the results we want,” he said, “but that was always looking externally to what the issues were and how we could change the schedule or the way we train, but this group of lads is so hungry to find out how we can take control of that ourselves as a group of players and push forward.

“We are ultimately the ones on the pitch, it is easy to go up to the coaches and start pointing fingers, but we are on the pitch every week. That is something that has taken me by surprise here. Probably just due to my experiences before of being in this situation, a situation which a lot of people haven’t been in before at Bath.

“There are some dark days, I won’t hide away from that. Coming in after the eighth loss, we have had some dark times, but I think the resilience of the group to pick themselves up and go again has been really, really good.”

McNally’s career has seen him rise up the rugby ladder over the course of the last nine years, culminating in his first England cap last summer. Playing for Henley Hawks before making the leap to London Welsh.

His career has seen him play in National 2, Championship, Premiership and Champions Cup, all with the support of the Royal Air Force who allow the 31-year-old to pursue his athletic dreams.

When you close your eyes and imagine a veteran, what do you see? @RoyalAirForce Weapons Technician and Bath Rugby second row, Corporal Josh McNally and former RAF pilot and Ex-England Rugby International, Rory Underwood MBE shared their thoughts this #RemembranceDay. pic.twitter.com/NBQd07MRr5

This is not to say that everything has been easy for McNally, who suffered a stroke in 2017. Speaking to TRU in December 2018 McNally discussed his spell of recovery, with all of his experiences up to now contributing to being a leader behind the scenes to help progress Bath.

“What I have is the ability to add something a little bit different to Charlie (Ewels),” McNally said. “Just from the amount of experience I have had in different environments, not just rugby environments, but within the RAF as well.

“I will always have an input on the way we play, but at the same time we have got British and Irish Lions at Bath, we have got 50-cap internationals that know the game a lot better than I do, and I try to draw a lot of my information from them and not to try and do it all myself.

“We have got a great leadership group that bounce off each other really well. Ben Spencer has done it all at Saracens, Ruaridh McConnochie has been to the Olympics, myself who has come from the military, it’s just great to bounce ideas off them to try and get the best out of the group.

“We have done a lot of work on keeping the lads fresh, keeping the lads engaged, how we live by our values, how we adapt and change to get the best out of the group. It is always evolving, but I love the challenge of it.

“It’s something I wouldn’t have seen myself doing at all, but I love the environment and the challenge that it brings.”