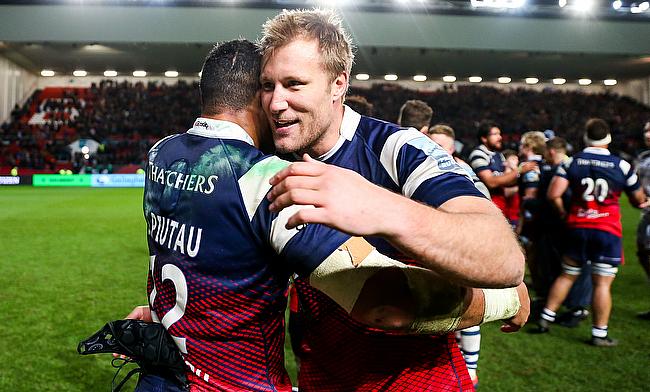 In September, it was announced that Bristol Bears back-row Jordan Crane would be retiring at the end of the season. Turning 34 in June, Crane would have enjoyed 16 years of professional rugby by the time the final whistle of his playing career is blown.

Starting his journey at Leeds Tykes, who would later become Yorkshire Carnegie, he moved to Leicester Tigers and spent 10 years at Welford Road where he won four Premiership titles and even picked up three England caps.

Crane moved to Bristol in 2016, the city where the 33-year-old spent several of his formative years when attending Colston’s School, but suffered relegation in his first season at the club. However, a successful campaign in the Championship would follow before Bristol established themselves again in the Premiership with a ninth-place finish in what was a hugely competitive Premiership season last year.

“I went to school in Bristol, so the team back then, when they had (Felipe) Contepomi, (Augustin) Pichot and them guys running around in the Prem doing their stuff, it sort of feels like we’re back to those days,” Crane started.

“As you can see from the attendances of the fans, they absolutely love it and when we’re going well they’re even better. The positive thing for us is that even in those hard times, when we were struggling in my first year, the fans were still coming out and still supporting us. The hardcore group of fans have stuck with the club through thick and thin and that comes through to the players.”

In Crane’s first year as a Bristol player, the club had three head coaches as they were relegated from the Premiership on their first return to the top flight after seven seasons in the second division. Andy Robinson, who had brought the club up, was replaced by club legend Mark Tainton on an interim basis until the end of that campaign and in the meantime, it was announced that Pat Lam would take the job on, on a full-time basis.

“My first year, we went through three head coaches,” Crane said. “We were sort of looking for somebody to rebuild and Pat has come in and done an absolutely unbelievable job in terms of culture and building the squad that he wants, the way that we play, running the club from top to bottom and that’s what Bristol needed.

“They needed a leader and he has come in, took that role and he has took it to the next level to be fair to him. Pat coming in, it brought a new lease of life into the club. For myself, I got back to enjoying rugby and what the club was about. Now we’re going from strength to strength and hopefully it’s only going to get better and better as we go on this journey.”

The end of the season will not be bringing around the conclusion of Crane’s association with Bristol. At the start of this term, Crane was appointed as the lead coach of the club’s U18s side, a role he will undertake on a full-time basis in the next campaign once his boots are permanently hung up.

“I always coached a team over the last four, five years, just like local clubs and stuff,” Crane added. “It was a nice fit (coaching the U18s) going forward and I had spoken to Pat over the last couple of years about it and the opportunity came up, to step in with the Academy this year and to play. It’s a nice transition for me for next year.

“From playing for Pat the last three years, I know the way that Pat wants to play and still being involved with the environment helps me do that well. There are guys that are coming through next year who will be part of the first-year squad, or transitioning to the first team squad and it will help them having a taste of what it is like to be in the Bristol Bears environment and under Pat.”

Since their most recent return to the Premiership, it is the emergence of the Bears’ young talent that has been the most impressive. Last season, the likes of Piers O’Conor and Callum Sheedy were breakout stars, earning an appearance for the England XV against the Barbarians last summer.

This season has seen the rise of Ioan Lloyd from the club’s academy, impressing hugely at the Premiership 7s and he has now consolidated himself as a regular feature in the matchday squad. Another academy star that has represented the first team on several occasions this season is hooker Will Capon who spoke to Talking Rugby Union at the end of last year about his burgeoning professional career.

With several months of rugby still ahead of Crane, there is little time for the Premiership stalwart to reminisce on his career where he historically took a spot-kick in the first ever rugby penalty shoot-out. Leicester won the shoot-out 7-6, with only Leicester wing Johne Murphy missing a kick at the sticks.

“That’s the small claim to fame, but the fact we went on to lose that final is a little bit of a tough one,” Crane said. “For me, winning four Premierships for Leicester was massive, then getting capped for England. Even my time at Bristol, winning the Championship, getting the club back to where it should be, consolidated in the Premiership.

“Some of the stuff we played last year was some of the most enjoyable of my career. Just because we were probably written off a bit at the start and then we pulled out some big results which people didn’t see coming. Some of my fondest memories will have come from the last two years that we have played.”