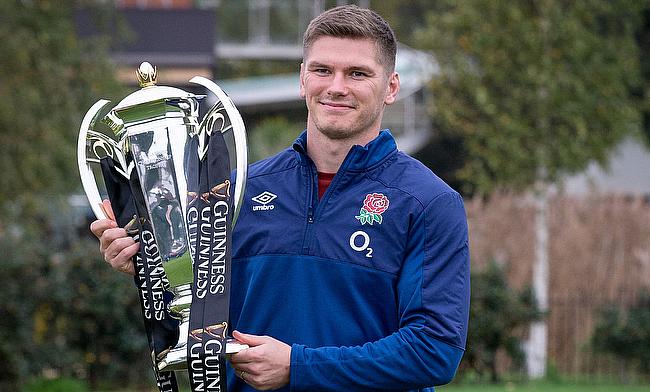 Saturday will be just the third time that England have faced Georgia, but there is an air of intrigue surrounding their Autumn Nations Cup clash at Twickenham despite the Eastern Europeans losing both of the previous meetings between the nations.

In the last two decades, the Georgians have become the most consistent champions of Europe, winning what many coin as the ‘second tier of the Six Nations’, the European Nations Cup and the Rugby Europe International Championships on 12 occasions.

To take on their Tier Two opposition, Eddie Jones has selected a mixture of youth and experience for the game having handed a debut to Jack Willis as well as a first start to Worcester centre Ollie Lawrence.

It has been a quick rise for 21-year-old Lawrence, picking up his first cap for England in Rome, a short time after being introduced to the elite playing group. Now starting on Saturday, Jones says that other players have been helping the former Bromsgrove schoolboy with his preparation for his full debut.

“He has shared a lot of information with him consistently. On Wednesday, JJ was giving him tips on what he needed to do, so that has been one of the most impressive things in the camp so far. I have really been delighted about the attitude of the players. We have got guys that have got 100 caps now and 50 caps.

“Their ability to share information with the young guys, making sure they are bringing those younger players on has been great and the younger players understand their responsibility of pushing those older players. There is a nice bit of co-operative competition between the squad, which has really pleased me.

“I love the attitude of our players at the moment. They are so keen to keep progressing forward and the Georgia game is a good game for us and it is a tough game mentally for us because the expectation is that we are supposed to win easily. The narrative is that it is going to be an entertaining game, but we know we are going to be playing against a team that is going to be hell-bent on making the game difficult.”

Lawrence was one of the form players in the Premiership following its return in August. As the seasons began to change, his performances didn’t and the former England U20 international established himself amongst the very best in the top-flight.

Following the injury to Many Tuilagi, there was a place available in the midfield and Lawrence fits the bill entirely. He is, in many ways, the archetype of the future of Worcester that Alan Solomons is hoping to grow, with the club hoping to use more players who are developed locally.

Max Malins, too, is set to be making his debut for England on Saturday from the bench, with Elliot Daly saying that he has been impressed with how the new caps have settled into life at the Lensbury.

“The way he (Lawrence) has come in with that ability to express himself in training, I think all the youngsters at the minute are doing that, which is perfect,” Daly said. “It is pushing the squad along nicely.

“It is keeping everyone on their toes, obviously everyone brings a different side to their game or a different aspect that they can bring to different Test matches or different training environments.

“Ollie is definitely one of them. The likes of Max (Malins) as well, who is obviously getting a go this weekend, it is great to see those boys coming through.”

England come into this new competition as obvious favourites. In the last 12 months, Jones’ team have got to a World Cup final and won the Guinness Six Nations, whilst also being able to select five different players in each position, but remain competitive.

Only 100-cap man Ben Youngs has got prior experience of playing against the Georgians, the scrum-half leading the way against the side at the 2011 Rugby World Cup when England dispatched their opponents 41-0 in Dunedin.

Perception leading into the game is that England will make light work of their opponents, many using Scotland’s 48-7 win over Georgia as a reference point.

Regardless of the expectation around him and his teammates, England captain Owen Farrell says that he is excited for the challenge their opponents pose.

“I really don’t like sitting here answering questions in that way, in terms of people saying that we are expected to win big,” Farrell said. “I am looking forward and excited about the challenge ahead.