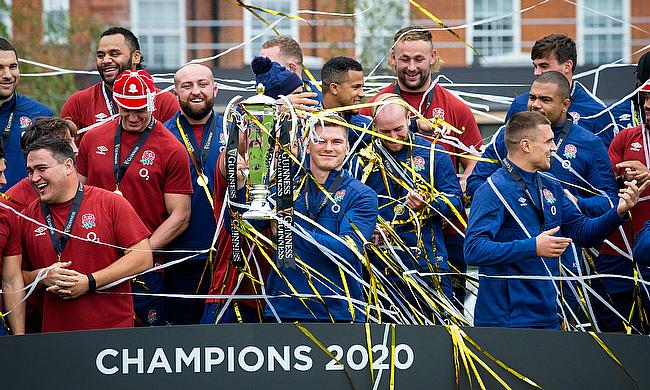 Tom Dunn: “All you can control is what you are doing”
Ankle injury rules Anthony Watson out of England's Autumn Nations Cup game against Georgia
Leicester Tigers sign Richard Wigglesworth ahead of 2020/21 season
France's Antoine Dupont named Six Nations' Player of the Championship for 2020

Following an eight month wait for the return of international rugby in the northern hemisphere, the Autumn Nations Cup will be offering four weekends of high-quality action.

England will be starting their Autumn Nations Cup campaign against Georgia at Twickenham on Saturday afternoon. Crowned Six Nations champions following their 5-34 win over Italy and aided by France’s dispatching of Ireland in Paris, England come into the new Autumn competition as favourites to lift the trophy in early December.

Presented with the trophy at the team's hotel last Sunday, players were granted several days at home before going back in London to prepare for Georgia. We were able to see the Eastern Europeans in action several weekends ago as they took on Scotland in Edinburgh, losing 48-7.

In 2018 and 2019, England took on Georgia at numerous training camps. The camps have been remembered for the heated nature in which they took place. Punches are claimed to have been thrown as the teams came to grip with each other and there are even more claims that the Georgians bettered the English at scrum time.

Having been ring-rusty at times against the Italians in Rome, England captain Owen Farrell believes that there is even more to come from England as they build to going into the Autumn Nations.

“The most exciting thing about the performance at the weekend was that I thought we had prepared really well, I thought we got some big bits right, but at the same time; I felt like there was loads more in us, a lot more,” Farrell said. “That is really exciting going forward into this next competition and through to next weekend especially.

???“It was a proud moment, a great honour to play”

Seven days on from making his debut for England last weekend in Rome, @tomdunn92 describes his thoughts and feelings about getting his first cap.

The Six Nations victory was England’s third in five years, each of them having come under incumbent Head Coach Eddie Jones. In the past two seasons, the Australian seems to have got some consistency in his selection, the main selection changes coming when there is injury to a player usually in the matchday 23.

Last weekend saw the debut of three players that have recently taken regular spots in some of Jones’ training squads. Both Tom Dunn and Ollie Thorley have been involved consistently with training squads for the past year, whilst Ollie Lawrence has only recently been considered for selection, making his debut for England last weekend.

Having been under the scrutiny of Jones, the 60-year-old explained how he rates players with the potential with making the step up from the Premiership to international rugby.

“How quickly they adapt to the training environment is the number one thing for us,” Jones said. “Every time we train, it is a grading session. We want to grade the players from one to 36, at the moment, and see where they sit and see how they handle they session and that gives an indication.

“Some people are growing and some people are shrinking. The people who are growing, if they keep growing to the extent where their growth is above that of an established player, then we will select them.

“It is just a matter of how quickly they can adapt. Some players adapt very quickly, some players don’t adapt so quickly and we have had players for who it has been 12 months in camp before they got a game for us, whereas other players have been here for a week and got a game.

I was fortunate enough to speak to @englandcricket's @sambillings about being in a bio-secure bubble.

Sam discusses his relationship with @J_George2 and the mental side of being shielded away from the outside world.

“And, if we think they have the potential to do it, then we bring them into camp and we test that attribute and see whether we think it could go to the next step, which is test level.”

Living in a bio-secure bubble, England are looking to improve as a team across November. A year removed from their World Cup Final loss to South Africa in Japan, Farrell feels extremely fortunate to be in camp and be playing rugby.

Not only this, he says there is little expectation on the team in a new competition because of the chance they have to play top level international rugby for the next month.

“The thing is for us is, we’re lucky to be in the situation that we are in,” Farrell said. “It was a long time ago since things seemed like they were normal and things were running the way that they were before, but we have got an unbelievable opportunity to be here in camp, together and enjoy training and preparing for our games and an unbelievable opportunity at the end of each week to get out there as play.

“We are so privileged to be in the situation that we are in. There is no real expectation other than to enjoy what is in front of us and to improve as a team”