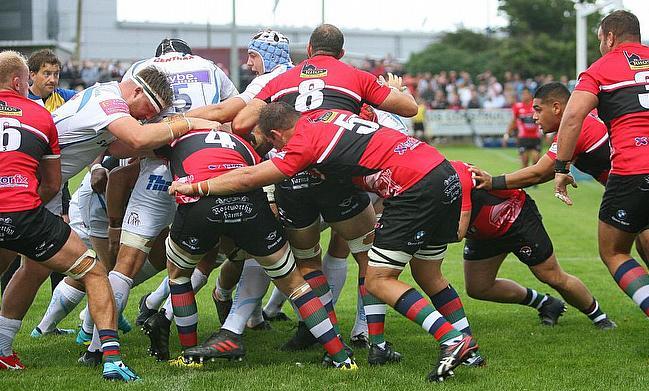 Cornish Pirates are the early frontrunners in the Championship
©Brian Tempset

Carnegie righted the wrongs of their visit to Hartpury with a resounding victory over Richmond at Headingly.

The Leeds-based club scored a try early on through former Otley player Dan Temm, allowing Brendan Cope to open his account for the game with a conversion.

In what was a scrappy game with plenty of knock-ons, both sides struggled to take the game by the scruff of the neck. Temms converted effort was the only action of the first half.

Cope was involved in Yorkshires next score. His cross-field kick was collected by wing Chris Elder-Wolfe, who extended the home sides lead. Cope added the extras to the try he created.

Richmond scrum-half, Luc Jones, scored his sides only try off the back of a driving maul, that Rob Kirby duly converted.

Not long after Richmond’s Ronnie McLean was sin-binned for a high challenge, winger Dan Moore scored his second try in two games by darting over in the corner. Cope was unable to convert the try from the touchline.

Cope would miss another conversion after the 80-minute mark. This time, Sam Wolstenholme finished off a Dan Temm and George Watkins move on the wing to complete the win.

After their surprise first round victory over Jersey, Coventry succumbed to Cornish Pirates in Penzance.

It was 3-all after five minutes with Will Cargill and Will Maisey exchanging penalties. Pirates number eight Tom Duncan was the first try scorer of the afternoon, his effort being converted by Cargill with ease.

Cargill extended his teams lead further in the 35th minute with another penalty. Right before half-time, Cornish remained in the ascendency as Harry Strong scored in the corner for Cargill to get more points from the tee.

Thanks for joining us today! Hell of a performance from the lads!! pic.twitter.com/yRIIMXPvFk

It was Cargill who carried on the points scoring in the second half too. The former Leeds Beckett captain kicked three points just after the 50 minute mark to extend Pirates’ lead further.

Coventry then scored their only try of the afternoon through Tom Kessell who dived into the corner, reducing Cov’s deficit. Maisey converted Kessell’s try.

However, Duncan was in action again scoring another try, but Harvey Skinner missed the conversion. Skinner did convert the final try though, securing his sides 35-10 win.

A second bonus point win in two weeks sees Cornish go first in the table on 10 points with their closest rivals one point behind them.

Bedford hosted Jersey in their first home game of the season after their close opening fixture at Nottingham last weekend.

As for the visitors Jersey, they played their second away match in as many weeks after their loss to Coventry in Round One.

Hooker Charlie Clare started off the scoring with an effort from the back of a driving maul that went unconverted. Jersey then got into the game with a penalty from former Ulster and Bath fly-half Brett Herron.

Former Bristol and Worcester player Augustin Slowik then scored to give Jersey the lead after excellent work by Herron, but the No.10 was unable to convert the try.

Player/coach Lee Dickson was instrumental in Bedford’s next try. He put through the mercurial Dean Adamson for yet another score in a Blues shirt. Ed Coulson added the extras for Blues to give them a 12-8 lead going into half-time.

In the second period, Clare went over the line again in a similar fashion to how he scored his first try, although on this occasion, Coulson converted the try. 14 minutes later, Herron scored an individual try and converted it himself.

Dynamic back-row Conor Joyce gave Jersey the lead with only 12 minutes on the clock left. Herron converted the score to extend Jersey’s advantage. Jersey were reduced to 14 men in the closing stages of the game, giving Bedford renewed hope of victory.

And the Blues were able to win this contest after the 80-minute mark as they were awarded a penalty try to automatically win the game and put them third in the table after two rounds.

Nottingham started competitively at the Madjeski, but Stephen Myler’s expert kicking put Irish on the front foot. Scrum-half Ben Meehan opened the scoring after the pack drove close enough for the 25-year-old to pounce with Myler adding the extra two points.

Canadian international Shane O’Leary reduced Irish’s lead with a 22nd minute penalty. However, Irish weren’t in the mood for a close game. USA’s Bryce Campbell was the beneficiary of Topsy Ojo and Meehan’s creativity. Myler converted his teammates score from the touchline.

Billy Robinson then scythed through to score a try for Nottingham, although O’Leary was unable to convert the score. One minute later Irish hooker, Dave Porecki, crashed over to allow Myler to get two more points from the tee.

Irish ended the half with the score at 28-8 as Josh McNally crashed over the line on the 40-minute mark and Myler’s personal tally increased through another conversion.

Springbok Pat Cilliers was the first man to get his name on the score sheet after half time. The former Leicester player went over for a score following a driving maul. You may have guessed it, Myler added the extras.

Italian international Luke McClean extended Irish’s lead further on the 57th minute mark. The winger got on the end of a Tom Stephenson offload, naturally allowing Myler to get two more points thanks to his boot.

Blair Cowan was next to go over as he scored a try to make it 47-8, but Meehan, who had taken on kicking duties, couldn’t convert the try. Nottingham scored again in the 68th minute. David Williams started an attack from his own line and finished the move off at the other end of the pitch. O’Leary converted.

Meehan missed yet another conversion after McClean got his second of the afternoon. Nottingham did have the final say though as winger Alex Goble sprinted through the Irish defence to make the score 52-20.

Ealing have had an interesting week to say the least. The departure of head coach James Buckland after the clubs’ opening day defeat to London Irish was overshadowed by the news of Matt O’Connor’s departure at Leicester.

But Ealing began on the front foot in this contest as Laurence May started the scoring with an early penalty. Guy Armitage then proceeded to make a try out of nothing as the former Wasps man, who has impressed in his first two Championship games, gave May his first conversion of the afternoon.

May was unable to covert his own try though on the 18th minute following Anthony Durultalo’s ingenuity. Winger Charlie Ignall scored a try for Scottish to reduce their visitors’ lead at the Richmond Athletic Ground, which Rory Jennings converted superbly from a tight angle.

Howard Packman restored Ealing’s advantage by breaking the Scottish defence with hard running and gave May another two points from the tee. Trailfinders hooker Alun Walker was next to get a try. The Scotsman latched on to the end of a driving maul to extend Ealing’s lead and hand May another pair of points.

The first half finished with a Pete Austin try following another lineout, catch and drive. Jennings was unfortunate enough to hit the post on this occasion with his conversion. Ealing wouldn’t record a point in the second half, meaning that Scottish made it a close call.

Ignall scored a second try that this time went unconverted and Ed Hoadley scored soon after which brought Scottish within 12points of Ealing. Mark Bright took a tap and go that confounded the Ealing defence and it allowed Jennings to bring the score difference to five points.

However, Scottish were unable to take it any further than that. Playing impressively well in their first two games of the season, Scottish may be a side to look out for as the season wears on.

Doncaster had a disappointing visit to Cornish last weekend and Hartpury surprised many with their victory at home to Yorkshire Carnegie. Neither side made many changes ahead of this fixture at Castle Park.

Knights opened the scoring just after the 10-minute mark as Tongan international Kurt Morath kicked a penalty to give the Knights an early lead.

However, Hartpury hit back soon after as scrum-half Richard Bolt darted over the line to give his former Rouen teammate, Luke Cozens, an easy kick over the sticks.

Cozens was pulling out all the tricks early on in this game. The veteran fly-half, slotted a drop goal to extend ‘Pury’s lead to seven points before the 20-minute mark.

All the Knights could muster was another Morath penalty as Hartpury extended their lead yet again after dotting down following a driving maul. Cozens confidently converted the try to give Hartpury a 6-17 lead at half time.

Knights came out firing in the second half. Dominating Hartpury in the forwards, Doncaster were rewarded with a penalty try following continued pressure at the scrum.

The Doncaster onslaught was nowhere near finished. Former sevens star Cameron Cowell crossed the whitewash to give Morath another two points to add to his collection.

Morath continued to build Knights’ lead with a penalty taken on the Hartpury 10m line. Castle Park veteran Steve McColl went over from 60 yards out, but Charlie Foley missed the conversion.

The last action of the game was 143kg prop Joe Sproston being yellow carded as Doncaster had to stop ‘Pury from getting into the match late on. This win saw Doncaster move up to fifth in the Championship table.

Although this will mean very little at this stage of the competition, Cornish Pirates are on top of the table with 10 points with London Irish and Bedford Blues close behind on nine points. Ealing Trailfinders are sixth on five points as Nottingham sit bottom of the pile with one point.