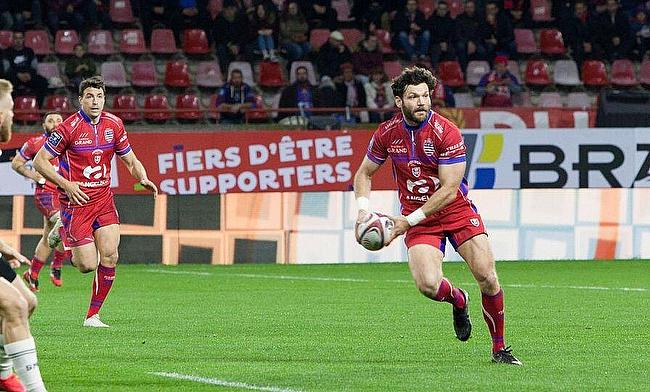 Zack Henry: ‘Outrageous Leicester opportunity’ to good to turn down
Daniel Tuohy on recovering from injury and the modern game
Ollie Stedman: Rugby at a full-time level could be done
Kendrick Lynn on 'disrupters' Lyon

Beziers has been at the centre of much media speculation in the past couple of months.

Linked with the likes of Courtney Lawes and Beauden Barrett, the club’s potential takeover was certainly getting tongues wagging. Unfortunately, that deal has fallen through, but star centre Jeff Williams is still enjoying his time on the French south coast.

For all intents and purposes, Williams is English. Having represented the country at Sevens for the best part of four years, he was born and raised in East London, South Africa and his accent a testament to that. Starting his time in the sevens set up with Ben Ryan, Williams also played under Simon Amor before going to Bath just months after the side lost the Premiership final.

Three seasons and a lengthy lay off following a knee ligament injury, Williams returned to France in order to turn out for Beziers in Pro D2. Starting his professional career in the third division of French rugby, the centre says that he feels very much at home in the country.

“Basically, it is just the way of life,” Williams said. “The way you get treated, I suppose it is a little bit more old school, more family oriented. Maybe how rugby was played 20, 30 years ago. You are not treated as an asset, there is a saying in France, they call it the rugby man. You just feel the love and that appreciation.

“Unfortunately, I don’t think many clubs get it in the Premiership. A few clubs do, so it is a combination between professionalism and that human touch that I really like. In France, they look after you on a professional level with everything; a house, a car and a salary. There is just that old school feeling about it too.”

Williams came to Bath at a time of change. Months after he had arrived, then Director of Rugby Mike Ford was released from his role, before Todd Blackadder came into the building. Not having the same successes as the 2014/15 season, Williams says that although it was an aspiration of his to play in the Premiership, it wasn’t the correct environment for him.

“It’s an amazing place to live, an amazing place to play,” Williams said. “I struggled a lot with the feeling of being an asset, of being disposable and you can be cut off at any minute and the whole business and professionalism. I am very human, very emotional, so I really didn’t strive in those conditions and I think that was the big difference.

“I think it happens in a lot of Premiership clubs and a lot of sports clubs around the world. Especially now with sports being so professional and people are more a brand than ever. But I did enjoy making new friends and I wouldn’t change anything because I learnt so many lessons.”

After leaving Bath, Williams headed straight back to the continent. Initially signing for Stade Rodez Aveyron in Federale 1, after one season, he was asked to move up a division to play for one of the country’s most historic clubs.

Winning the French top division on 15 occasions, the club initially struggled with the advent of professionalism, sliding down the leagues prior to consolidating themselves in Pro D2. Playing at the Stade Raoul-Barriere, the side are often performing in front of packed out stadiums home and away.

With salary cuts and squad restructuring a constant headline maker in the United Kingdom as a result of Covid-19 and the financial strains that has caused, Williams believes that coming to France could be a real option for players without work in England, with the financial model seemingly more sound.

“We haven’t had much talk about salary cuts or squads changing in France,” Williams said. “We have been in isolation for three, four months and the clubs (in England) have taken 35%, 25% pay cuts and people have been let go. It has been like three months. They have basically had an earlier preseason, and everything has changed.

“Guys are running into each other, concussions are through the roof. All of this is going to come back and bite people in the arse when they are 60, when they have got replacement knees, hips and you can’t walk. I feel sorry for the squad player, the middle ground rugby player with all that is happening.”