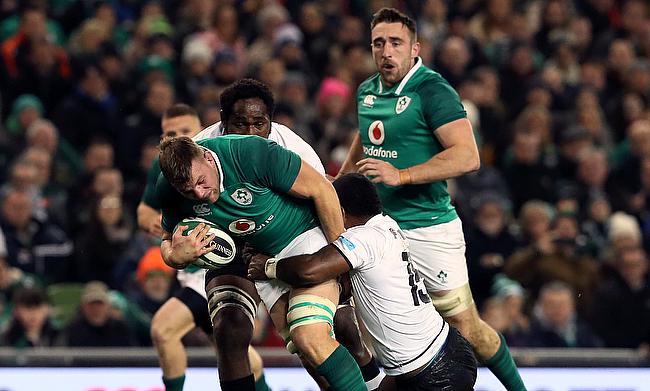 Ireland international Jordi Murphy, centre, is to join up with Ulster next season
©PA

Ireland flanker Jordi Murphy will make a switch from Pro 14 club Leinster to rivals Ulster at the end of the ongoing Pro 14 season.

The 26-year-old joined Leinster in 2011 and has just returned to action following a serious knee injury. The former Ireland U20 international has penned a two-year deal with the Kingspan Stadium outfit.

"It's been an incredibly hard decision to leave Leinster, where I have made some great friends and enjoyed some fantastic times, but I am excited by the prospect of moving north and linking up with some familiar faces," Murphy said on the Ulster website.

"Having considered my options at length, I realise that this represents a great opportunity for me to challenge for a position at Ulster and hopefully become a more regular feature in the national set-up.

"Ulster is building a strong squad for next season and I'm really looking forward to the new challenge. However, I am fully focused on contributing as best I can for Leinster for the remainder of the current campaign."

Director of rugby Les Kiss feels Murphy will prove a valuable asset to the Ulster squad, which will also be boosted by the pending arrival of Wasps prop Marty Moore.

"The acquisition of Jordi for next season is great news for everyone connected with Ulster Rugby and I believe this move will greatly benefit both parties," Kiss said.

"At 26 years of age, we believe Jordi has the potential to play the best rugby of his career at Ulster and that is a hugely exciting prospect."

Murphy has featured in 18 Tests for Ireland and was recently recalled for the autumn international clash against Fiji last month.