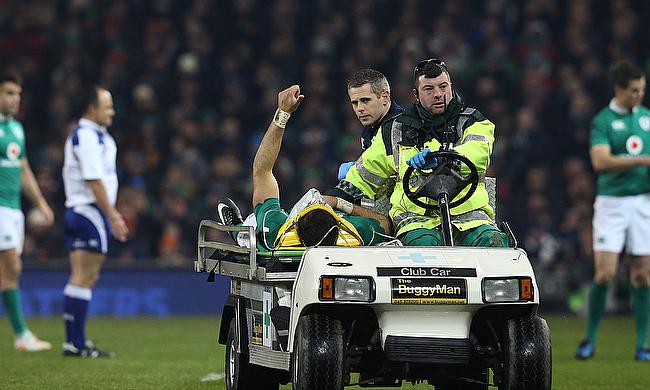 Ireland team manager Mick Kearney has slammed the match officials for letting the New Zealand players off the hook during their 9-21 defeat in Dublin on Saturday.

Kearney revealed that the citing commissioner has 12 incidents from Saturday's game with New Zealand players involving in 11 of it. All Blacks duo of Sam Cane and Malakai Fekitoa will attend a disciplinary hearing in the next two days.

Cane made a fierce tackle on Robbie Henshaw, which forced him to leave the field in the 10th minute with a concussion and has already been ruled out of Ireland's upcoming clash against Australia.

Meanwhile, Fekitoa performed a high tackle on Simon Zebo, and received just a yellow-card sanction from the referee.

Prior to the November Tests, World Rugby had issued stern warnings on the clampdown of dangerous tackles and any further punishment to either Cane or Fekitoa will question the standards of the match officials, who were part of the Saturday's game. Also the television match official (TMO) Jon Mason's performance is also been reviewed.

"The evidence is fairly clear that Robbie took a shoulder to the jaw, which knocked him unconscious before he hit the ground," Kearney said.

"He came in (on Monday) morning to see the doctor and has since gone home.

"The citing officer picked out 12 incidents during the game; 11 of them referred to New Zealand.

"The one that referred to us was a clean-out of Sam Cane at a ruck and we were cleared of any foul play in that incident.

"It is disappointing, to be honest. There were a number of tackles and bangs around the head.

"We received the edict from World Rugby in the last week or 10 days and Joe (Schmidt, Ireland head coach) would have sat the squad down, and shown them the various footage, including examples of tackles around the head and neck area.

"World Rugby had said if these incidents occur then you are liable to a red card, possibly. So that obviously didn't happen at the weekend."

Apart from Henshaw, Ireland fly-half Jonny Sexton is also declared unfit for the upcoming Test against Australia with a hamstring injury while both CJ Stander and Rob Kearney must undergo return to play protocols after sustaining head injuries during the game.

Zebo along with Peter O'Mahony, Keith Earls and Ultan Dillane are expected to return to training after suffering niggles.