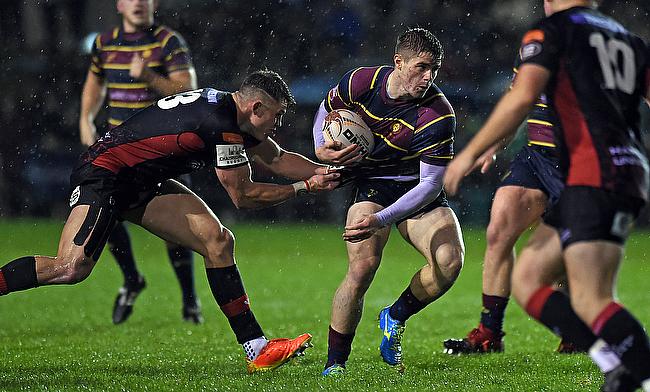 Durham and Cardiff Met remain unbeaten whilst it was a dream day for Exeter’s Tshiunza
Resilient Banatvala ready to take his rugby to the next level
Participation and enjoyment - why the University of Leeds are putting their players first
BUCS Super Rugby Round-Up: Beckett blow Bath away and Exeter thrash Swansea

Danny Milton’s side braved the elements to see off Hartpury in Round Four whilst there were victories for Durham, Exeter, Loughborough and a first win for Swansea.

We also focus on the Women’s Premier National League as some of Scotland’s brightest talents helped Edinburgh to a third consecutive triumph + we wrap up the best of the BUCS Rugby action.

Cardiff Met continued their unbeaten start to the season after seeing off Hartpury in torrential weather conditions.

Morgan Nelson and Bradley Roderick-Evans scored in the opening quarter to put the hosts in front before two Joe Winfield penalties and a Cameron Cobbett try brought Hartpury right back into the contest.

The weather made everything difficult so the students had to adapt fast & show incredible agility to flex roles. pic.twitter.com/1KvUckadB2

Nelson’s second score from close range gave the Archers a cushion but on the stroke half-time, the away side responded again through the boot of Winfield.

With the rain hammering down, both teams then exchanged penalties and three points from an in-form Roderick-Evans kept Cardiff Met’s collective nose in front.

But the decisive moment of this contest came in the final 10 minutes as Max Cunnington slid his way into the corner for one BUCS Super Rugby’s early pacesetters.

Durham ran in seven tries as the current BUCS Super Rugby champions coasted to a comprehensive victory against Bath.

The Palatinate are just two points behind Cardiff Met after comfortably earning their third triumph of the term.

Alex Keay’s men were 21-0 up at the break after tries from Matt Woodward, Jack Reid, and Fred Davies, with Patrick Bishop landing all three conversions.

After the interval, Bath hit back with a penalty but the hosts were quick to reassert their dominance as Paul Brown, Jamie Anderson, Harry Craven and Will Morris got in on the act.

George Wootten’s score and a second try for Bath did provide the Blue and Gold with some respite, but this was another excellent display by Durham.

Exeter secured their second win on the bounce in BUCS Super Rugby with a hard-fought victory over Leeds Beckett.

The visitors led 19-11 at the break thanks to tries from Oli Burrows, Arthur Relton and Kofi Barton-Byfield but only after Beckett had opened the scoring through Conor Oresanya.

??Make sure to check out the Match Report from yesterday's superb @BUCSSuperRugby victory against Leeds Beckett. ??https://t.co/ouvcRdRdtN pic.twitter.com/tNb06LJLdR

After the restart, Josh Barton kept Exeter in control as he took his tally to seven points following a penalty, but the home side began to exert some real pressure on the Green and Whites.

Harvey Dunn was shown a yellow card after multiple warnings from the referee and Beckett’s efforts were finally rewarded when Oresanya darted over for his second.

It was all hands to the pump for Exeter in the closing stages, but Keith Fleming’s side stayed resilient to see out the victory.

Loughborough scored four tries as they eventually ran out comfortable winners against Cardiff in the Midlands.

An even first half saw Ed Dunford and Reece Malone swap penalties to leave the game all square at 6-6 before the home side grabbed the contest by the scruff of the neck.

A score from captain Teddy Leatherbarrow was followed by a penalty try before Henri Lavin and Malone crossed the whitewash to seal a third win of the season for Loughborough.

Swansea claimed their first victory of the BUCS Super Rugby campaign at the expense of Northumbria following an entertaining contest in the North East.

After Cam Wilkinson had opened the scoring for the home side, two tries for Swansea saw them go in front.

The Welsh outfit then took advantage of a Joe Lilley yellow card to wrap up the bonus point before the break, but a second Wilkinson effort brought Northumbria back into the battle.

After the interval, Gwyn Parks’ penalty kept Swansea ahead before a fifth try of the afternoon gave them a 24-point lead.

Lilley made amends for his first-half sin-binning by scoring a third for Northumbria, and Luckas Blue made sure Jon Benson’s men finished the game with a try bonus-point.

Edinburgh ground out a hard-fought 12-5 victory to condemn Loughborough to their first defeat of the season.

It was first blood to the Midlands side in this contest, but tries from Scotland 7s star Meryl Smith and emerging talent Cieron Bell gave the champions the lead.

What a thriller! 12-5 victory for Edinburgh over Loughborough. A 0-0 2nd half which didn’t disappoint despite no points.

Thanks to @Mr_Mark_Brown for some early snaps, look forward to seeing the whole gallery pic.twitter.com/XzgNucoiaP

And it was a scoreless second period in the Scottish capital as Claire Cruikshank’s side maintained their winning start to the campaign.

Meanwhile, Durham came from 7-0 down at half-time to beat Hartpury 20-12 with club captain Rosie Inman getting on the scoresheet and Cardiff Met claimed their first win of the season as they defeated Northumbria 24-10 on their travels.

In Premier 1 - North, both Newcastle and Durham 2nds made it three wins out of three on Wednesday.

League leaders Newcastle were 5-3 down at the break against Leeds but tries from the likes of Will Roberts and Ollie Kynge saw them coast to victory whilst Durham beat Edinburgh 25-16 up in Scotland.

Another team yet to taste defeat this term are Nottingham Trent, as they grabbed their third win on the trot and did so in dramatic fashion against city rivals Nottingham.

Dave Ross’ charges looked to be heading to their first loss of the campaign but came up with the goods in the last play of the game to snatch a 17-15 victory.

Also in this section of the division, Birmingham made it two wins on the spin as they got the better of Leeds Beckett 2nds 31-12.

Bristol are now the only unbeaten side in Premier 1 - South after securing their third consecutive victory. The West Country outfit beat Cardiff 2nds 26-10 whilst both Bath 2nds and Exeter 3rds saw their early season momentum come to a halt.

The Blue and Gold had to settle for a 40-40 draw in a thrilling contest against Cardiff Met 2nds, but it was a 52-12 defeat for Exeter 3rds against their 2nd XV.

Elsewhere, Hartpury 2nds breezed past St Mary’s as they comfortably won 41-17 in the capital.

Loughborough 2nds clinched their second win on the bounce in Premier 2 - North after edging past Bishop Burton 14-10. Only one point separates the top five in this half of the division after third-placed Glasgow beat Sheffield (5th) 34-19 whilst Doncaster recorded their maiden victory of the campaign after securing an excellent 36-10 success against Manchester Met.

In the south, Cardiff Met 3rds and Brunel University continued their eye-catching starts to the term. The Archers won 39-0 against Brighton to seal their third win in as many games whilst former Northampton Saints academy player Louis Martin scored a hat-trick as Brunel thrashed Portsmouth 106-3.

And last but not least is Men’s Scottish 1 where Sterling remain on top of the pile despite losing to Aberdeen 12-6 and it was a first win of the term for Heriot-Watt after they beat Glasgow 2nds 24-5.

If you’d like your university to be included in our round-ups, please let us know!