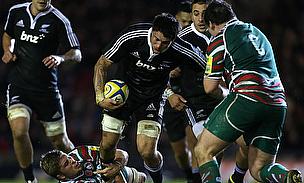 The Highlanders won their first Super Rugby title with a 21-14 win over the Hurricanes in Wellington.

This game was played at a high pace with both teams keeping the ball alive and at times taking quick taps instead of kicking for touch. The breakdowns were fiercely competitive with plenty of penalties. The Highlanders kicked plenty of box kicks and dominated territory.

The Highlanders played a high risk and energetic defensive game with rushing defence and disruptive tactics, even if it meant losing the penalty count in an attempt to disrupt the Hurricanes, especially in the Highlanders defensive red zone.

The Hurricanes star playmaker Beauden Barrett had an off night with the kicking boots, missing his three first half opportunities. The Highlanders grabbed two well taken penalties by Lima Sopoaga.

Towards the end of the first half the Hurricanes stole a Highlanders lineout which lead to Ma’a Nonu scoring in the corner through the tackle of Josh Hohneck.

The Highlanders responded through a great individual try to loose forward Elliot Dixon who looked to have landed the ball on the defenders foot before grounding it. The try was awarded. The Highlanders took a 13-5 at halftime.

The Highlanders gave away some early second half penalties needlessly in non-pressure situations and Barrett finally found his kicking radar.

There was a try from sustained pressure from the Highlanders to give a try to Waisake Naholo in the corner.

Sopoaga missed some second half kicks at goal in a role reversal of the first half with Barrett.

The game was a very tense encounter, and the Hurricanes changed their game plan to get some more territory and pressure on the Highlanders which saw uncharacteristic mistakes from experienced players like Ben Smith and even the Hurricanes star Julian Savea.

Lima Sopoaga went off injured and the Highlanders had to use their six forward replacements to try to hold onto their 18-14 lead.

Marty Banks almost scored a try from a dropped goal attempt which he almost stepped his way to the try line. Aaron Smith stepped up and took control for his team. The Highlanders kept it in tight. Marty Banks kicked a dropped goal, the third time.

The Highlanders held on 21-14 to win their first ever Super Rugby title. An amazing achievement from a team that started the season as 25-1 outsiders.