How the All Blacks made it to the RWC Final

It might not have the ancient animosities that are infused into every fibre of the northern hemisphere grudge matches, but it has become without doubt the biggest rivalry in rugby.

The semi-final at Twickenham on Saturday may not have decided which side is the best in the world -that moniker is still to be awarded in the Rugby World Cup’s finale - but it is so often the prize whenever these two sides meet in their annual fixtures.

New Zealand emerged victorious, 20-18, from this contest, booking their place in the final at Twickenham this weekend and have two moments of excellence to thank for that safe passage.

The All Blacks got off to a blistering start, crossing the whitewash in just the 5th minute and did it seemingly with remarkable ease.

It all started with New Zealand’s decision to take a quick lineout to Nehe Milner-Skudder. The winger, who may be the most elusive running threat in world rugby, was faced with one Springbok defender, Bryan Habana, and then a whole lot of free ground before the South African defensive line.

Once Milner-Skudder was brought down, New Zealand loaded the blindside with their best forward carriers. Jerome Kaino was the man charged with taking the ball into contact and brought a big gain, leading the All Blacks into South Africa’s 22.

The All Blacks then used the openside. The majority of their back line was out there, as well as some of their more pedestrian carrying threats from the pack. To clarify, pedestrian is used only in comparison to Kaino, Read and Coles, and not a critique of their ability. 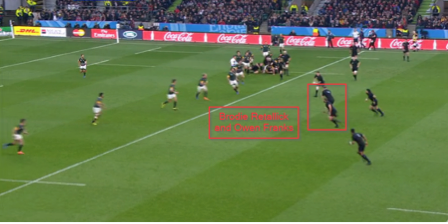 Having created some space on the blindside, New Zealand once more went to their forwards. Richie McCaw took the place of Read in the trio and made a great pass up and over the advancing defenders to unleash Kaino. From then, it was just a case of Kaino pinning his ears back and heading for the try line.

It’s actually an error in judgement from both Fourie du Preez and Bryan Habana, as the Springboks did have the numbers to deal with New Zealand’s attack, but for some reason both players blitzed up on McCaw, allowing him to negate them both with his over the top pass to Kaino.

Making these kinds of defensive mistakes against the All Blacks rarely, if ever, goes unpunished.

New Zealand’s second score was very similar to their first in many respects as it hinged upon stretching the defence in one direction, before coming back and striking where the opposition’s defence was at its weakest.

Again, the initial foray came to the openside, with the All Blacks not utilising the much talked-about ‘diamond formation’, but instead opting for a more traditional triangle.

New Zealand went through the phases close to South Africa’s try line, attempting to draw in as many Springbok defenders as possible. Conrad Smith and Ben Smith both remained stationed on the blindside, which kept the South African defence as widely spread as possible.

Having stretched the South African defence, the All Blacks struck. They sent the ball wide, Dan Carter fired a bullet pass to Ma’a Nonu and the veteran centre used all his years of accrued wisdom to lethal effect. He feinted to run straight at Damian de Allende, but then stepped and ran a simple outside arc. The move caught de Allende a little flat-footed and prevented JP Pietersen from committing to the outside man, on the chance de Allende was unable to recover and catch Nonu. 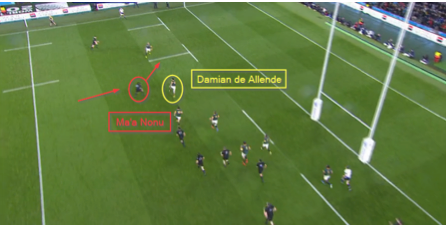 By running at the space and not the man, Nonu was able to draw in both defenders and give himself a simple pass to Beauden Barrett for the score.

Of course, with the rain teeming down and the pressure cooker that is a RWC semi-final, nothing much is simple, but this kind of clinical execution is a hallmark of the All Blacks’ game.

It would do the Boks a real disservice if we didn’t stop now to mention the positives of their performance. After all, they were the better side for vast swathes of the game.

For the majority of the first half, South Africa were winning the individual battles all over the pitch. The indomitable Francois Louw was giving McCaw a lesson at the breakdown, pillaging ball which he seemingly had no right to. 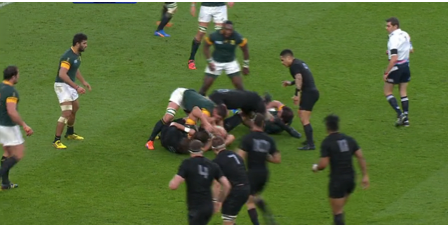 It really is textbook technique from Louw and Read’s attempts to burrow into the side of the South African and dislodge him from the ball were useless. Louw’s feet were widely spread, giving him a solid base, his balance excellent and superb timing to get in and over the ball. The Bok may as well have had his feet encased in concrete for all the good the New Zealand clear-out did.

Scrum-half du Preez was also in fine form, particularly in the first half, and helped South Africa control field position with his perfectly weighted kicks. The understanding between du Preez and Habana was excellent, with the winger exposing the inexperienced Milner-Skudder on more than one occasion with a precisely-timed kick chase.

The scrum was another area where the Springboks prospered, with starting props Tendai Mtawarira and Frans Malherbe putting the squeeze on Joe Moody and Owen Franks on numerous occasions.

Ultimately, however, South Africa just didn’t look like cutting open the New Zealand defence and the penalties they reaped from New Zealand’s ill-discipline just weren’t enough to match the more clinical All Blacks.

It’s now back to the drawing board for Heyneke Meyer and his men, with a number of key players set to bow out from international rugby over the next few months, whilst Steve Hansen will begin preparing his charges for the biggest game of their careers to date.