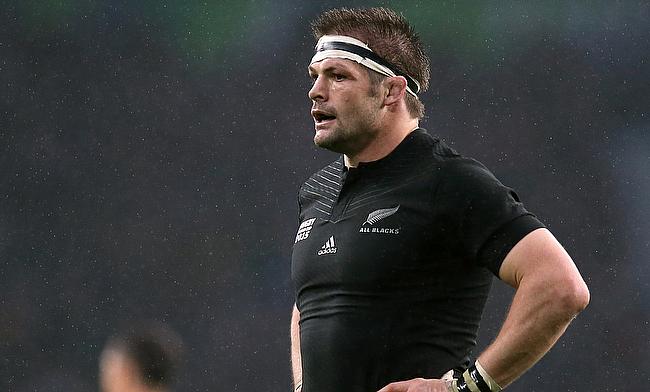 It is unclear whether McCaw made contact with his elbow or hip, and it is an incident that could yet attract the interest of match citing commissioner Mike Rafter.

If that scenario unfolds and 147 times-capped McCaw faces a disciplinary hearing, then a possible suspension would sideline him for next weekend's World Cup final.

The citing commissioner has up to 36 hours after the match has ended to lodge a complaint, setting 6am on Monday as the deadline.

But Hansen, speaking at a press conference in Weybridge on Sunday, said: "There is nothing in it, so there's nothing to talk about. Everyone has got a bit excited, and we move on.

"He (McCaw) is a man that draws a lot of attention because he's been a great player, maybe the greatest player in the history of the game.

"If he is not in your team, he's a pain in the rear end, so it goes that if you can't get him on the track let's get him off the track.

"It's a mark of respect, really. He takes it in his stride, and the team takes it in their stride."

Bath forward Louw briefly went off nine minutes after the first half McCaw incident - which happened at a ruck - for treatment to a cut caused during a lineout.

"He had two knocks to his head, and we put some sutures in the one from an elbow during the lineout, but that won't keep him out of the match on Friday," Springboks team doctor Craig Roberts said, ahead of the Springboks facing a World Cup bronze medal match in five days' time.

New Zealand will become the first team in rugby union history to make a successful world title defence if they win the final, but South Africa pushed them all the way before going down 20-18.

" When you have performances like we did in Cardiff (62-13 quarter-final win against France) it's very difficult mentally to get back into that same spot," Hansen added.

"It was a really tight, tough game (against South Africa) where we probably didn't play as well as we could have.

"I think some of our game needs to be looked at. We will go into the final really hungry for a performance.

"We won't be overrating ourselves, which will be good. I think we will lift, there will be enough excitement. The final will be energising in its own right."

And reflecting on the semi-final clash, All Blacks centre Sonny Bill Williams added: " It could have gone either way.

"We could have been sitting on the ground there knowing that four years' hard work was over.

"It's simple. You have just got to stay in the moment and not worry about the outcome, what the final score is going to be.

"At half-time, we talked about fixing up a few technical things, but just trying to stay in that moment because it was do-or-die footie."

And Williams' fellow centre Conrad Smith said: "There was not too much panic at half-time when we were down to 14 men (after a yellow card for Jerome Kaino). There was still a lot of belief.

"We didn't need to change too many things, we just needed to show a bit more urgency, and I think we did that in the second half."