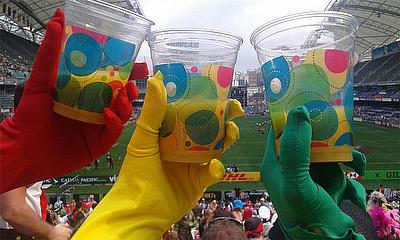 And finally the party has moved on to Hong Kong for the 7th leg of the World Series. Hong Kong attracts tourists from all around the globe for the annual weekend of rugby madness.

Whether you find yourself in the South Stand or soaking up the ale, the sparking Hong Kong showpiece has something for everyone. Sevens has gone professional, and the players are in the ‘City of Lights’ to display their mesmerising skills.

South Africa currently leads the World Series with a mammoth 126 points out of a possible 132 points. England (103 points) and Fiji (100 points) will be hoping to close the gap on the World Series leaders with just three legs in Singapore, Paris and London remaining after Hong Kong.

The Blitzboks currently lead the World Series and have been utterly dominant winning 4 out of 6 tournaments (Dubai, Wellington, Sydney, Las Vegas), and finishing as runners-­-up in the other two (Cape Town and Vancouver). The South Africans have been struck by an injury plague, with Justin Geduld, Kyle Brown and the lightning Rosko Specman being sidelined. This follows the Super Rugby departures of Seabelo Senatla and Kwagga Smith to the Stormers and Lions respectively. One of South Africa’s stars, Cecil Afrika is back, and will be looking to make a significant contribution in his 50th World Series tournament on the weekend.

England is the only other team to have won a tournament this year. England upset South Africa in both Cape Town and Vancouver and is the form team heading into the Hong Kong and Singapore legs of the tournament. Dan Norton has been sensational this year, and looks set to become the top try scorer of all time. Dan Norton and Colins Injera are currently joint holders of the record with an astonishing 244 tries each. This will be an epic achievement for a player that is seriously underrated, and unrecognised. Hopefully, Dan Norton finally gets some of the credit that he so richly deserves.

Fiji has underperformed somewhat under new coach Gareth Baber since winning the gold medal in the Rio Olympics. Fiji lack the organisation, discipline and decision-­-making that was so prominent under the tutelage of Ben Ryan. One cannot write Fiji off, they have players that can break open fixtures with a mix of pace, power and sublime skill. Jerry Tuwai has lightning feet, and acceleration that can tear even the very best defences apart.

If the rugby isn’t enough to keep you entertained, there are other attractions to keep your spirit up. Last year bizarrely saw David Hasselhoff perform Baywatch’s “I’m always here”, to the crowd’s total amusement, bewilderment and delight. This year it’s the turn of the British band ‘Madness’ to keep the crowds entertained.

The players have arrived, the stadium is set up and it’s just about time for a wicked weekend of rugby, music and festivities.
I’ll be live at Hong Kong Stadium from Friday to Sunday. @wadesgotit