Hodge flies flag for BUCS Super Rugby and the North-East 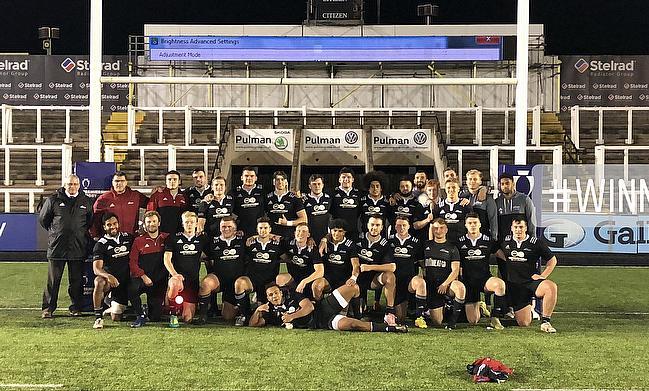 Newcastle Falcons continue to harness the development of university rugby
Simon Hammersley – I would not be playing in the Premiership if I hadn’t gone to university
Josh Beaumont heaps praise on university rugby
Greenwood: “You won’t find a bigger fan of University Rugby than me”

On a wet and windy Friday night at Goldington Road, a young England U20s side prevailed over their Italian counterparts 35-10 and one player in particular impressed.

Full-back Josh Hodge was named Man of the Match by Sky Sports underneath the floodlights but was quick to praise his head coach at Northumbria University.

Hodge is by no means the only player to have thrived in BUCS and then gain recognition like he did on Friday night. Italy’s Sebastian Negri was a BUCS Super Rugby champion just two years ago with Hartpury and he is now heralded as the future of Italian rugby.

Another fullback who massively benefitted from university rugby is Hodge’s teammate at Newcastle Falcons, Simon Hammersley. In an interview with Talking Rugby Union last March, the back claimed that he would never have played in the Premiership if it weren’t for his time at Durham university.

Former Northumbria student Will Muir’s university rugby career had scarcely finished last summer before he was jetting off with England Sevens to play at the Sevens World Cup in San Francisco. Muir’s Northumbria teammate, George Wacokecoke.

Big weekend for @EnglandRugby & current/former @NorthumbriaUni Students, who all represented the rugby program.

Involved with Falcons heavily last season, the 23-year-old has represented Newcastle at the Premiership Sevens, in A-League competition and even in a pre-season friendly against Leinster. A more than adept sevens player and 15-a-side player, Wacokecoke will certainly play professional rugby once his time at university is over.

Historically, north-east rugby has been a good production line for high quality players. Will Greenwood, Will Carling and Josh Beaumont all attended Durham University, turning out in purple on many occasions.

Rory Best, Ireland’s captain, was at Newcastle University when he studied agriculture at the turn of the century. Playing some rugby for the Falcons academy, as well as for his educators, Best has gone on to achieve great things at both international and club level.

Northumbria have finished seventh overall this season in BUCS Super Rugby, possibly suffering as a result of the talent in their squad being called up to representative sides. Durham, who have a game in hand, are just two points ahead of their north-eastern rivals, but the focus has to be on the bigger picture as both teams boast talented squads.

But anyway, back to Hodge. After an ‘edgy’ first half performance by the 18-year-old’s own admission, Hodge and his teammates grew into the game and the resounding second half performance should stand England in good stead for their final match against Scotland on Friday night

“It’s a really big boost for us,” added Hodge. “Against Wales, we didn’t perform as well as we probably should of, but going into the Scotland game, we’ve got a really strong vibe around the squad now.”

England U20s finish their Six Nations campaign at Franklin’s Gardens on Friday night against Scotland as the side hope to consolidate a second-place finish in the Championship.