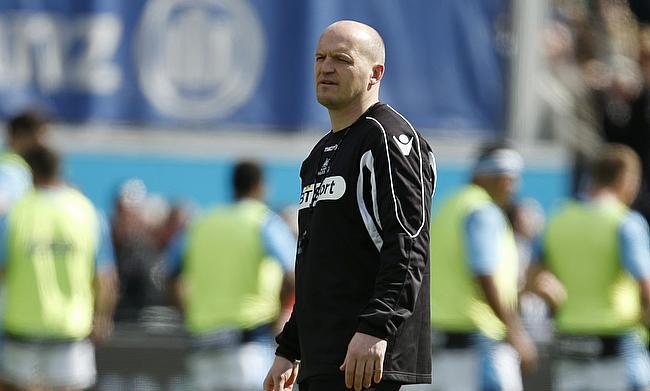 The proudest man at BT Murrayfield on November 10 may well be Sam Skinner’s dad should the Exeter Chiefs second-row go on and make his Scotland debut against Fiji that day.

That is because it was Skinner seniors’ influence that led to the 23-year-old former Scotland under-20 man earning a first ever call-up to Gregor Townsend’s squad this week.

Skinner is joined in the 40-man squad for November’s clashes with Wales, Fiji, South Africa and Argentina by fellow uncapped duo Blade Thomson and Sam Johnson.

And although Skinner will not be involved in the Wales game on November 3rd due to it being outside the international window, there is a good chance he could play seven days later in Edinburgh as Townsend and new forwards coach Danny Wilson mould their pack for next year’s World Cup.

Scotland head coach Townsend revealed: “It was a message that came into me from someone who had been speaking to Sam’s dad [that started the process of picking him].

“The message said that nothing would make his dad prouder than Sam playing for Scotland. So, we've been tracking him really closely since then.

“Having him available is a big bonus for us as he's an excellent player with a big future ahead of him.

“I spoke to him prior to the summer tour. We'd known about his Scottish qualification for a number of years as he was involved in the Exiles programme as a youngster.

“We'd have liked to have taken him on tour, but Sam didn't think it was the right time.

“He wanted to start the season and earn his place and he's done that. He's an excellent player, the lineout leader for one of the best packs in Europe, his decision-making is excellent and he produces really good running lines so we're delighted he's committed to Scotland.

“He is a man of integrity and wanted to make sure he made the right decision in the right circumstances, he wanted to earn his place. He was aware that everybody was available for November and in the summer, there were certain players that were going to be rested.

“I am delighted that in the start of this season when we continued these conversations, he was committed and really excited about his decision.

“I know that it will make his family really proud and he is looking forward to meeting up with the rest of our guys.

"This is a big decision for a player to make. They're playing for a club in England there are repercussions for them when they are no longer English qualified as everyone knows.

“He's earned this with how he's played.”

So, what of the other two new faces in the shape of Thomson and Johnson?

Back-row Thomson was born and brought up in New Zealand, but now the 27-year-old plays in Wales with the Scarlets while he has a paternal grandfather from Wishaw.

Centre Johnson, 25, has been with Glasgow Warriors since 2015 and the Australian-born player qualifies via residency.

“They are excellent players and that is first and foremost why we brought them in,” Townsend continued.

“We believe the rugby they're playing now - and that we believe they can bring to international level - will help us be a better team.

“Blade is probably the most established of the three new boys given he's a bit older and has played Super Rugby for the last three seasons.

“We've known about him and his Scottish qualification for a few years. I was even interested in signing him for Glasgow before he missed a couple of years through injury.

“So, it's great to see him fit and playing No.8 for the Hurricanes and now playing very well for the Scarlets.

“Sam Johnson is a player I know well having signed him for Glasgow three-and-a-half years ago.

“Each season he's got better and better and won the players' player of the season award last year, so that shows you how well he's performed.”

The new trio will meet up with the rest of the squad for a two-day camp at the start of next week with Townsend stating he picked a bigger than normal group given the fact that nine players will not be available for the Wales game as they play for clubs outside of Scotland.

Scotland squad for the Autumn Tests

Training with the squad: