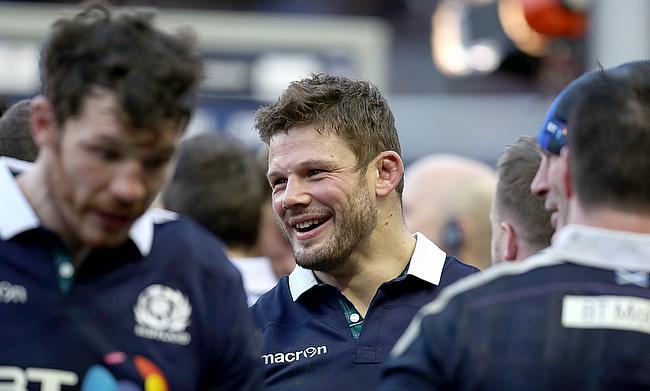 Ross Ford is targeting the World Cup in Japan
©PA

Edinburgh hooker Ross Ford tells TRU Correspondent Gary Heatly he is focused on earning a spot in Scotland's 2019 World Cup squad with just under a year to go until the tournament begins.

Ross Ford had a tough time of things during 2017/18, but Scotland’s most capped player of all time is now back fighting fit with Edinburgh Rugby and has a fourth World Cup in his sights.

The 34-year-old hooker made his 110th international appearance in the loss to Fiji last summer and then began that season with Edinburgh Rugby under Richard Cockerill.

Last November he was injured while training with Scotland, suffering a pectoral issue on his right side and then deciding to get a left shoulder problem also sorted out during his rehab.

He returned to action in March, playing a couple of times with Melrose as part of the pro draft, and then missed Scotland’s summer tour so that he could get a full pre-season under his belt.

With the emergence of Stuart McInally during his lay-off to first choice number two with club and county, Ford has had to bide his time, but he started for the Capital outfit in the defeat to Leinster at the weekend in the Guinness PRO14.

And with a burning desire to help Edinburgh reach the end of season league play-offs again and do well on their return to the Heineken Champions Cup, Ford very focused.

In fact, with the possibility of adding the 2019 World Cup in Japan to his list of showpiece event appearances from 2007, 2011 and 2015, he is perhaps even more determined than ever before.

First, though, he has to continue to get game time with Edinburgh, something that will not be easy given McInally’s form.

“I’d definitely want to have a bash at a fourth World Cup, we’ll see how it goes,” he stated. “There’s a lot of ground to be covered between now and then, so I’ll just go about my job and see what happens.”

“I’m not going to lie, with the Scotland squad that we’ve got now there is every opportunity we could do very well in Japan, so to be involved in that would be great. If it happens it happens, if not I’ve had a good kick at the ball, but it is my focus right now.

“It was a long season last season and obviously Stuart has come on and is playing phenomenally well, so my role’s been limited with Edinburgh. It was nice to get a run out at the weekend at Leinster and play a bit rugby, I enjoyed it.

“The result wasn’t what we wanted, but I’m quite enjoying being back and being involved with the boys and training and playing.

“I definitely think the break last year helped me though.

“I feel young and I’m still young, but week in, week out the pounding that you take is hard on your body, so I think that time off last year has allowed me to freshen up and realise I’m in the fortunate position that I get to play rugby.

? ICYMI | A reminder of your Edinburgh team to face @leinsterrugby in Dublin his evening. ??#AlwaysEdinburgh ???? pic.twitter.com/trnmYtpEgg

“It’s not overly difficult, you just have to train hard and do your job. I hadn’t had many injuries or had much time off before that, so it’s helped me.

“Last weekend was the first time I’ve had a proper hit-out in a while and I just really enjoyed it.”

With Al Dickinson having been forced to retire in the summer, Ford is the most experienced member of the Edinburgh squad now.

And, ahead of Friday’s home PRO14 match with Benetton, he feels that the club is in the best place it has ever been since he arrived.

“I think we’re probably the most rounded we’ve been since I’ve been here,” he explained.

“Teams are a little bit more aware of us this year and are showing us a bit more respect.

“We’ve got a lot of talented players in the squad, young players as well and we’re in a good position to do something this year with the squad we’ve got. I think we should be looking to achieve more than last year.”

Meanwhile, he was sad to see regular front-row colleague for club and country and old pal Dickinson call it a day before this campaign got underway.

“It was tough to see because I played a long time with Dicko and we’re a similar age and you never want to see anybody have to retire through injury.

“However, I think he was quite laid-back about it. He will be good in his new role [coaching in the Fosroc Scottish Rugby Academy] and will still keep himself in good nick.

“He’s got a lot of knowledge to pass on to young props coming through. If they can learn anything from him it’s not to let size or anything hold you back, don’t let folk pigeon-hole you because when he was playing well he was probably one of the best looseheads in the world and that is saying something about the man.”